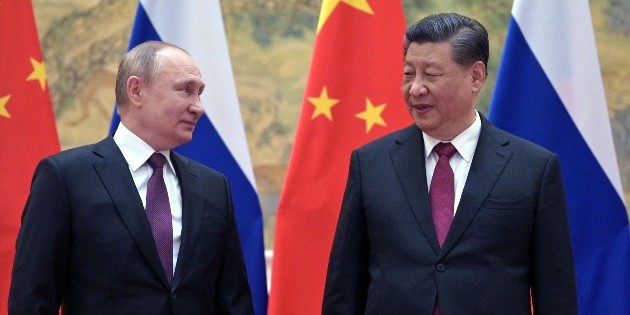 China and Russia published a joint statement criticizing US influence and the role of Western military alliances, the OTAN Y AUKUS, in Europe and in Asia, considering them destabilizing.

In this document, adopted during the meeting between Russian President Vladimir Putin and Chinese President Xi Jinping in Beijing, the two countries denounced “the negative influence of the United States for stability and a just peace” in the world.

Specifically, opposed “any future expansion of the OTAN”, resuming Russia’s demand to calm the tension with Western countries over Ukraine.

Thus, China and Russia ask the “Atlantic Alliance to renounce its ideological views dating back to the Cold War.”

Russia and China defend the idea of ​​”indivisibility of security”, on which Moscow bases itself to request that NATO leave its zone, arguing that the security of some cannot be achieved to the detriment of the security of others, thus ignoring the right of each State, and therefore of Ukraine, to choose its allies.

The two countries also denounced the “negative influence of the United States on the peace and stability of the Asia-Pacific region.”

Specifically, They showed their “concern” about the creation in 2021 of the military alliance between the United States, the United Kingdom and Australia, known as AUKUS, estimating that this association, focused above all on the manufacture of nuclear submarines, “affects questions of strategic stability.”

The creation of AUKUS was criticized by China, but the United States considers it a priority to deepen its presence in the region and counterbalance Beijing.