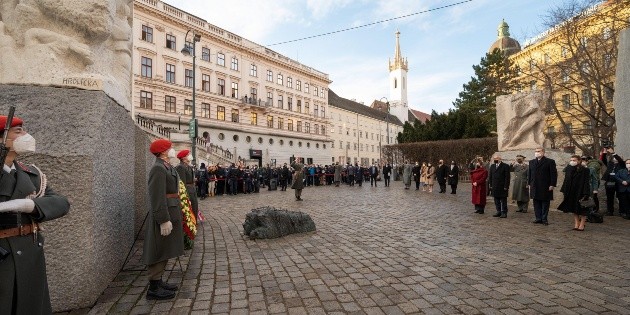 The King and Queen of Spain concluded on Monday a brief visit to Austria that included a floral offering in One in memory of all the victims of Nazism and, especially, of the Spanish – mostly republican deportees – and the opening of an exhibition dedicated to the surrealist painter Salvador Dalí.

The visit, which lasted about five hours, began with the reception of Felipe VI and Letizia with military honors by the President of Austria, Alexander Van der Bellen, and his wife, Doris Schmidauer.

Tribute to the victims of Nazism

After a brief meeting, focused on bilateral issues and in which the Austrian Foreign Minister, Alexander Schallenberg, also participated, the two heads of state and their wives had lunch together in the former imperial palace of the Hofburg, the current seat of the Austrian Presidency.

Later, they went to make a floral offering in front of the Monument against war and fascism.

This monument, located in the center of One, between the Opera and the Museum Albertina, is built of granite, the material that the prisoners of the Nazi camp in Mauthausen, located about 160 kilometers west of the Austrian capital.

Don Felipe and the Austrian head of state honored the victims of Nazism with two flower crowns in the colors of the Spanish and Austrian flags.

Of the around 15,000 Spaniards deported to Nazi camps during World War II, around 7,000 ended up in Mauthausen (Austria) and two thirds of them died in what is known as the “camp of the Spanish”.

In that camp – where between 90,000 and 100,000 people were murdered – the Nazi motto of “extermination through work” was applied, with brutal days in which fainting meant being finished off with blows or shots.

The Spanish began to arrive in Mauthausen in 1940, after the surrender of France, a country to which thousands of republicans had fled after the end of the Civil War.

The Nazis described the Spanish as “Rotspanier” (“red Spaniards”), and classified them as “political enemies” and “stateless”, since the Franco regime disregarded them.

This new tribute joins the one they already starred in in January 2020 at the Auschwitz extermination camp (now Poland), on the 75th anniversary of their liberation, along with other heads of state and government, including Van der Bellen.

The offering came four days after International Holocaust Remembrance Day, which commemorates the liberation of Auschwitz.

The last stage of the visit was the inauguration of an exhibition entitled “Dalí–Freud: an obsession” in the Gallery Belvedere from One, showing how Viennese theories influenced Sigmund Freud, “the father of psychoanalysis”, in the surrealist painter Spanish Salvador Dali.

The exhibition on Dalí -open until May 29- brings together a hundred objects, including paintings, photographs, writings, sculptures and films.

A total of 36 original pieces by Dalí, films by Luis Buñuel, 15 works by Federico García Lorca, histological drawings by Santiago Ramón y Cajal and sketches by Sigmund Freud himself bring visitors to the exhibition closer to the life of the Spanish creator.