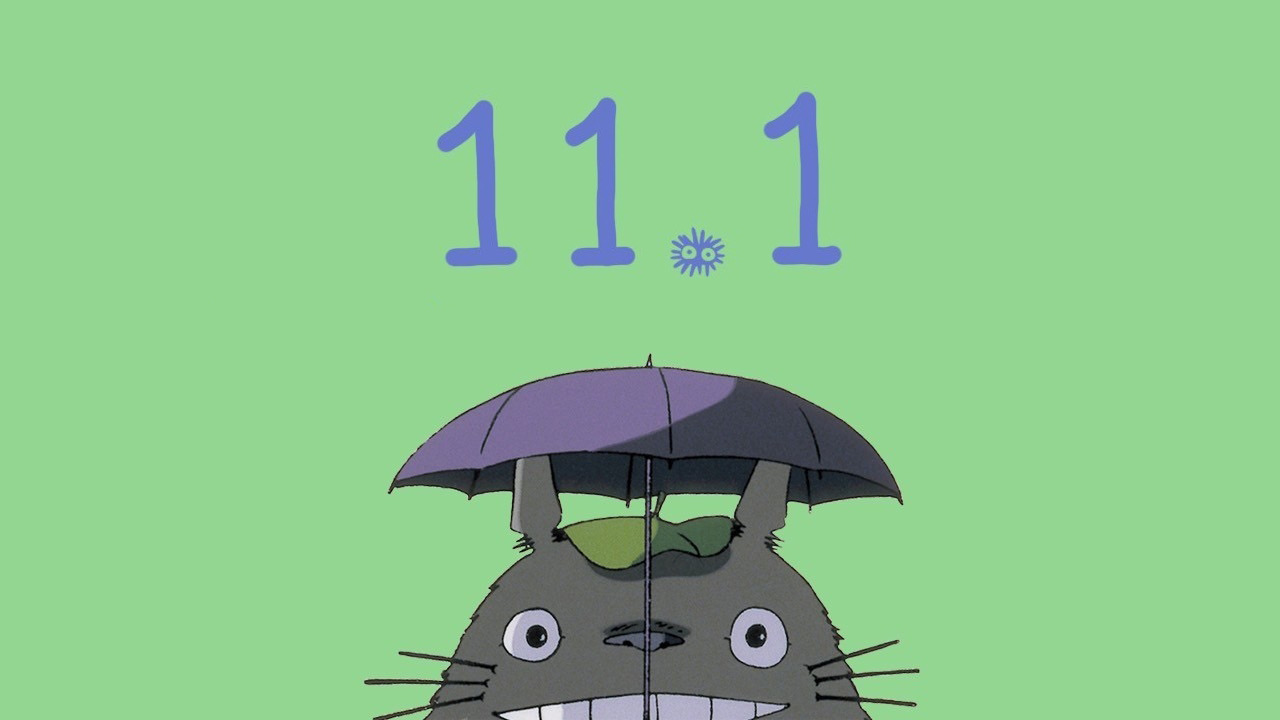 A theme park based on the animation house Studio Ghibli and its visionary director Hayao Miyazaki–the Walt Disney of Japan–will open on November 1, 2022 in Japan. This post offers a sneak peek at Ghibli Park, which will be an excellent counterpart to Tokyo Disneyland, DisneySea, and Universal Studios Japan.

Plans for Studio Ghibli’s theme park were first announced back in 2017 and plans have slowly been revealed since. As background, Ghibli Park will be located on the site of the 2005 World Expo in Aichi Expo Memorial Park in Nagakute City, Aichi Prefecture.

For those who are unfamiliar with Japan, Ghibli Park is in between Tokyo and Kyoto (closer to the latter), and is easily accessible while traveling between the two as it’s a stop on Tokaido Shinkansen (bullet train) line. When it comes to major cities and tourist destinations in Japan, the Studio Ghibli theme park is closest to Nagoya, which is roughly the size of Chicago.

The latest development with regard to Ghibli Park is the announcement of the opening date for the first phase of the theme park. Studio Ghibli producer Toshio Suzuki and Aichi Governor Hideaki Ōmura just revealed that the planned Ghibli Park will open on November 1, 2022.

The Aichi Tourism Bureau launched a new website with a promotional teaser video to accompany the announcement:

In addition to this, Ghibli Park’s official website will be launched on February 1, 2022 and should provide more specifics, including ticket prices and (hopefully) actual photos and videos of the Ghibli Park’s themed areas, attractions, and what else visitors can expect. For now, here’s everything we know about Ghibli Park.

For starters, only a portion of the theme park will debut this year. The Ghibli no Daisōko (Ghibli’s Giant Warehouse), Seishun no Oka (Hill of Youth), and Dondoko Mori (Dondoko Forest) areas of the Ghibli theme park will open on November 1, 2022. Let’s offer a quick run-through of these three areas… 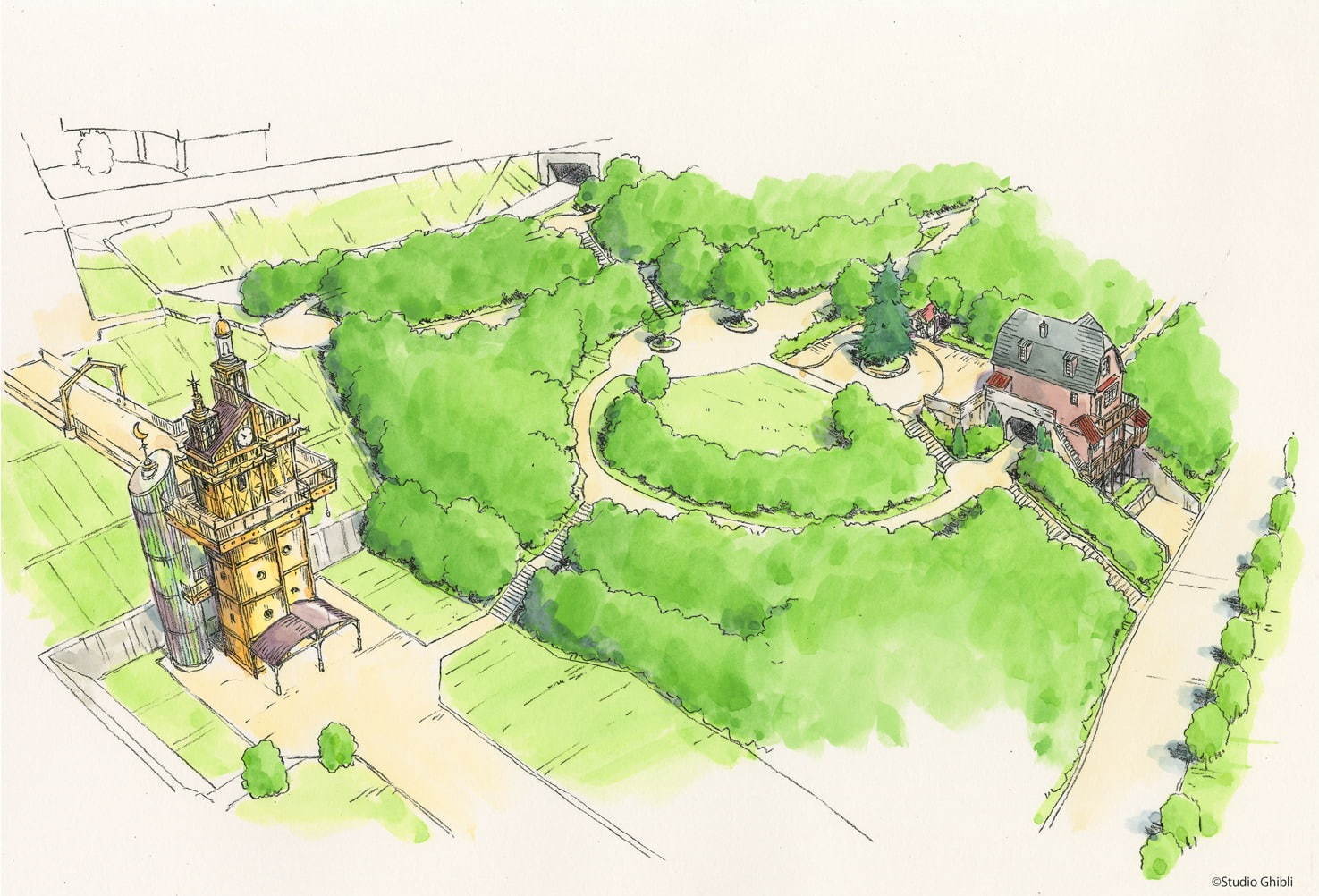 The Hill of Youth is the gateway to Ghibli Park. An old pedestrian overpass building has been transformed into a steampunk-inspired observation tower doubling as the main gate of the theme park. It features 19th-century icons you’ll recognise from Studio Ghibli films, Laputa: Castle in the Sky and Howl’s Moving Castle.

This area will also be home to an antique shop inspired by Whisper of the Heart, which is set in a small neighbourhood of Western Tokyo. You’ll also find a miniature version of the Cat Bureau from the Cat Returns. 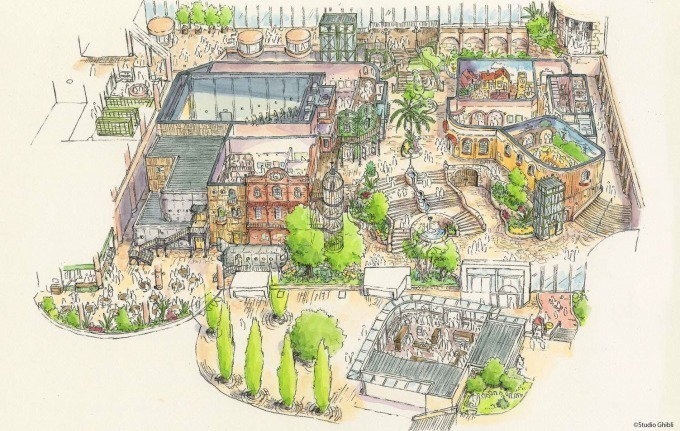 Next up is Ghibli’s Giant Warehouse.

The 9,600-square-meter (about 2.4-acre) Ghibli’s Giant Warehouse will have about four times the floor space of the existing Ghibli Museum in Mitaka, Tokyo. It appears this will be the core of Ghibli Park, with the most attractions, exhibits, and other things to do. 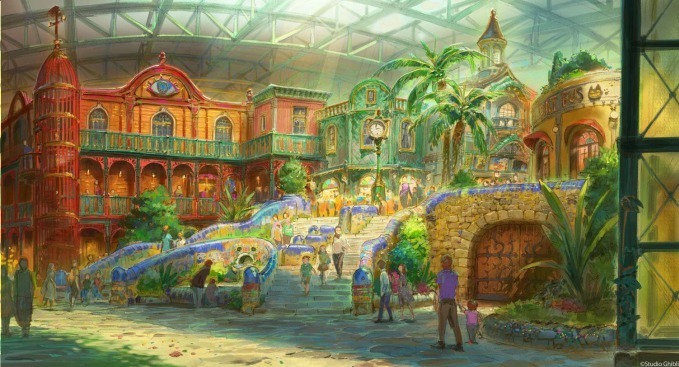 Ghibli’s Giant Warehouse indoor area will feature an exhibition area, children’s playground, shops and restaurants, and more. The exhibition room will house a small cinema with about 170 seats. This warehouse will feature an eclectic design, incorporating Japanese and Western architectural styles. 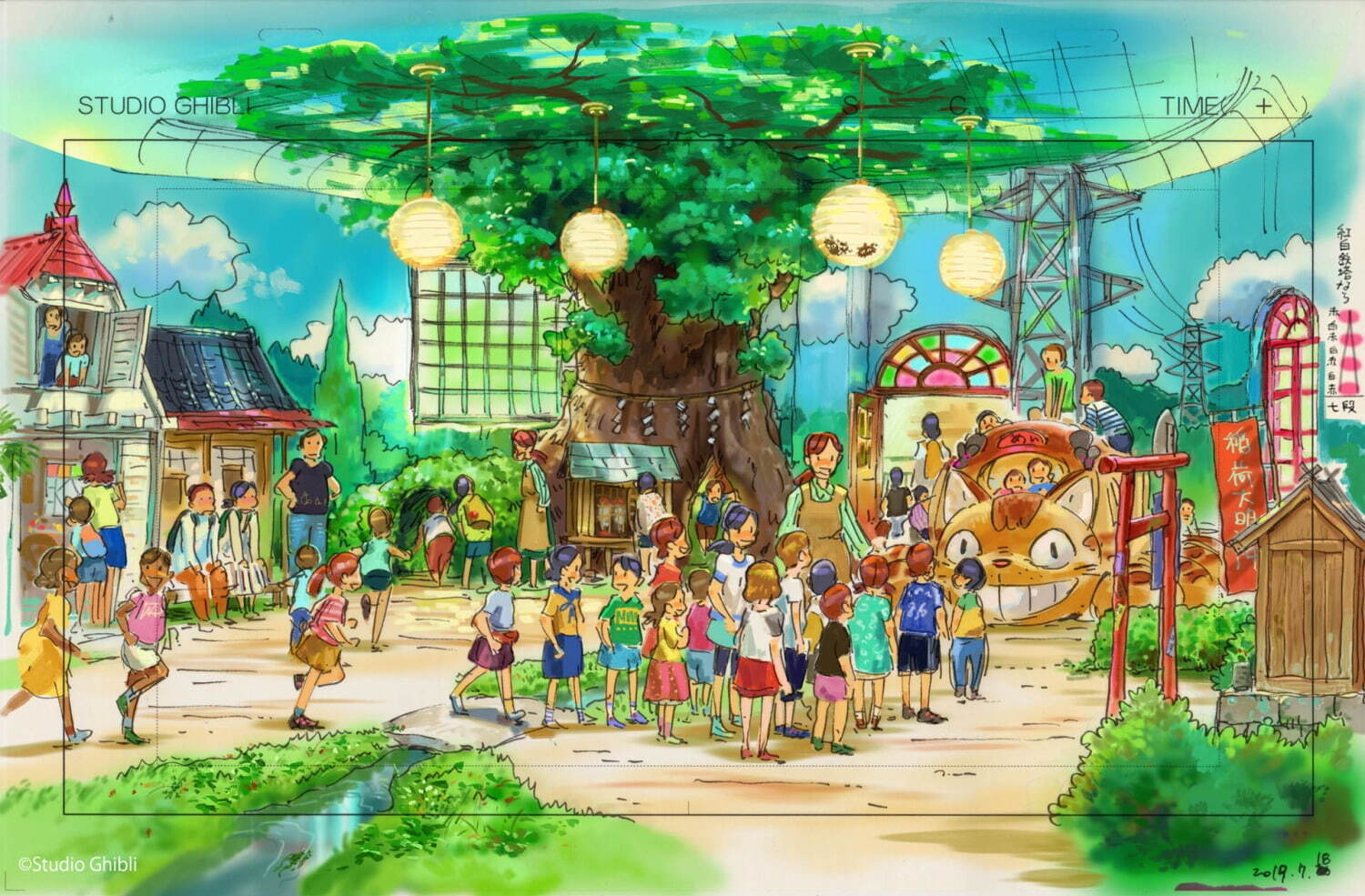 Among many other things, Ghibli’s Giant Warehouse will offer a playroom based on My Neighbor Totoro, complete with a lifesize Catbus, just like the one in the Ghibli Museum.

Before you get too excited about this, I have to warn you that one of the greatest travesties of all time is that adults are not allowed to play in the Catbus. Don’t let your dreams be crushed like mine were, and let my experience serve as a cautionary tale. 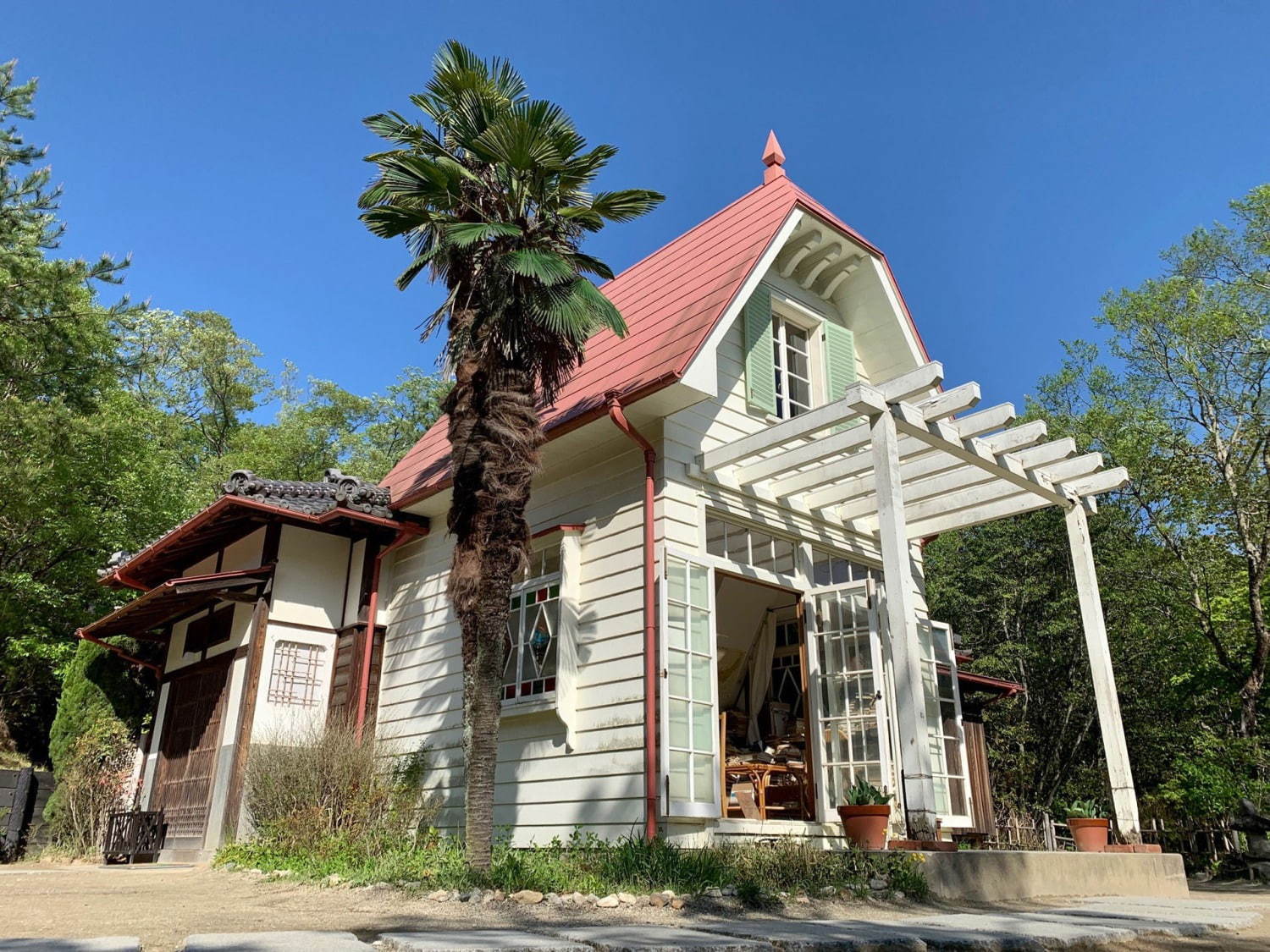 The final area to open on November 1, 2022 is Dondoko Forest.

This is literally set amidst a forest, with the goal of resembling a rural landscape from the Showa period. Dondoko Forest features Satsuki and Mei’s house from My Neighbor Totoro, which was actually already in this area of the park as a holdover from the World Expo. 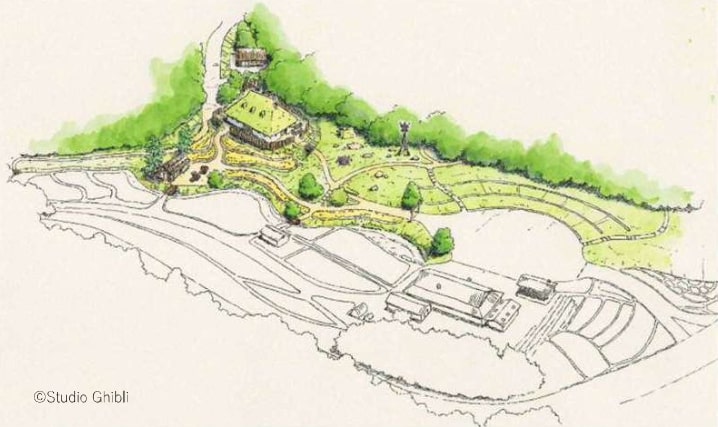 In the first half of 2023, the Mononoke no Sato (Mononoke Village) and Majo no Tani (Witch Valley, inspired by Kiki’s Delivery Service) areas of Ghibli Park will debut.

Let’s take a look at each of these areas… 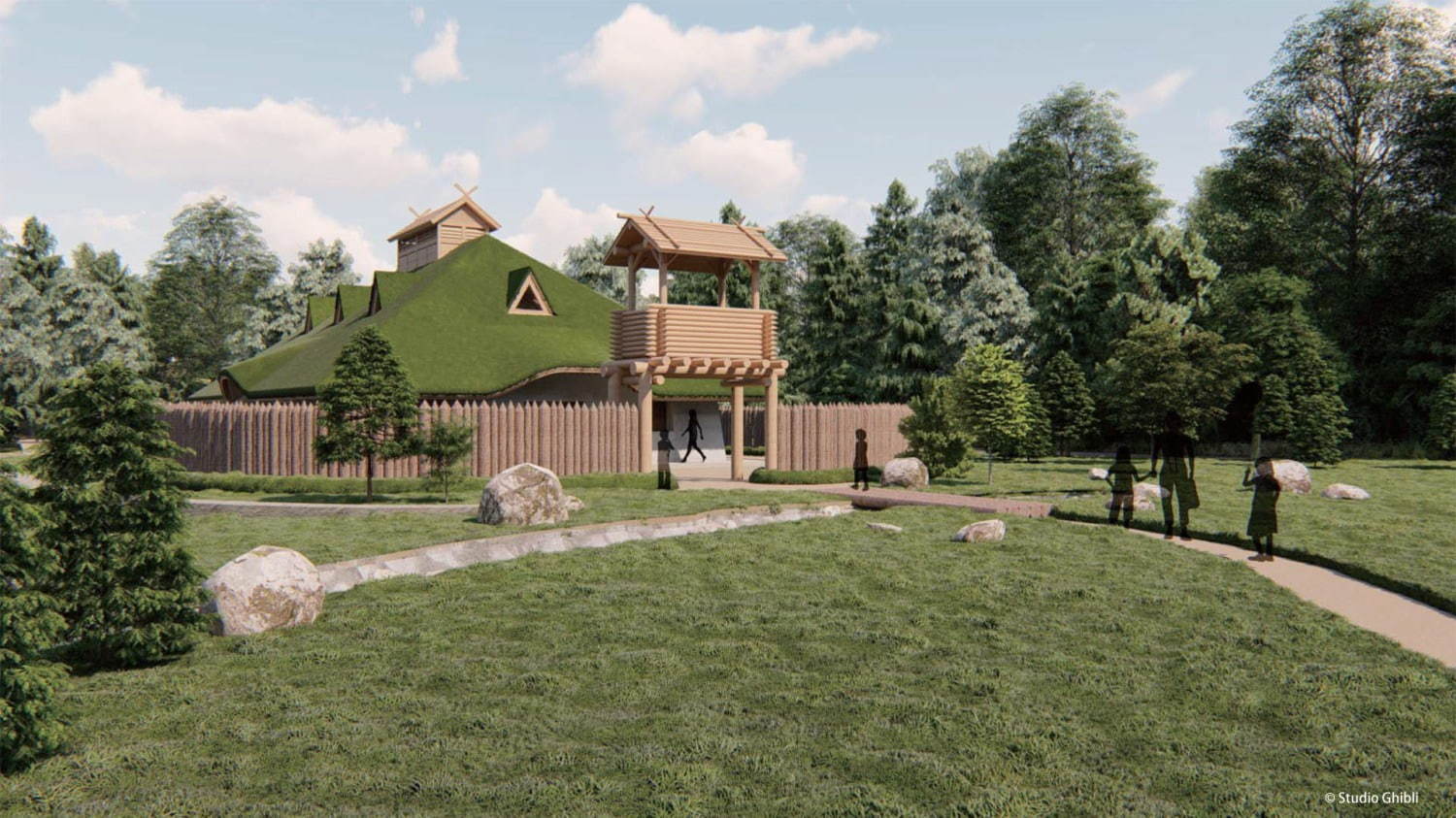 Mononoke’s Village will include a real-life recreation of Tatara-ba, the Irontown depicted in the movie Princess Mononoke (arguably Studio Ghibli’s best film).

It’ll feature a variety of giant statues from the classic Princess Mononoke, including the god of destruction, the boar god Lord Okkoto, and other mythical creatures. The transportative scenery evokes a rural landscape from the Muromachi period. 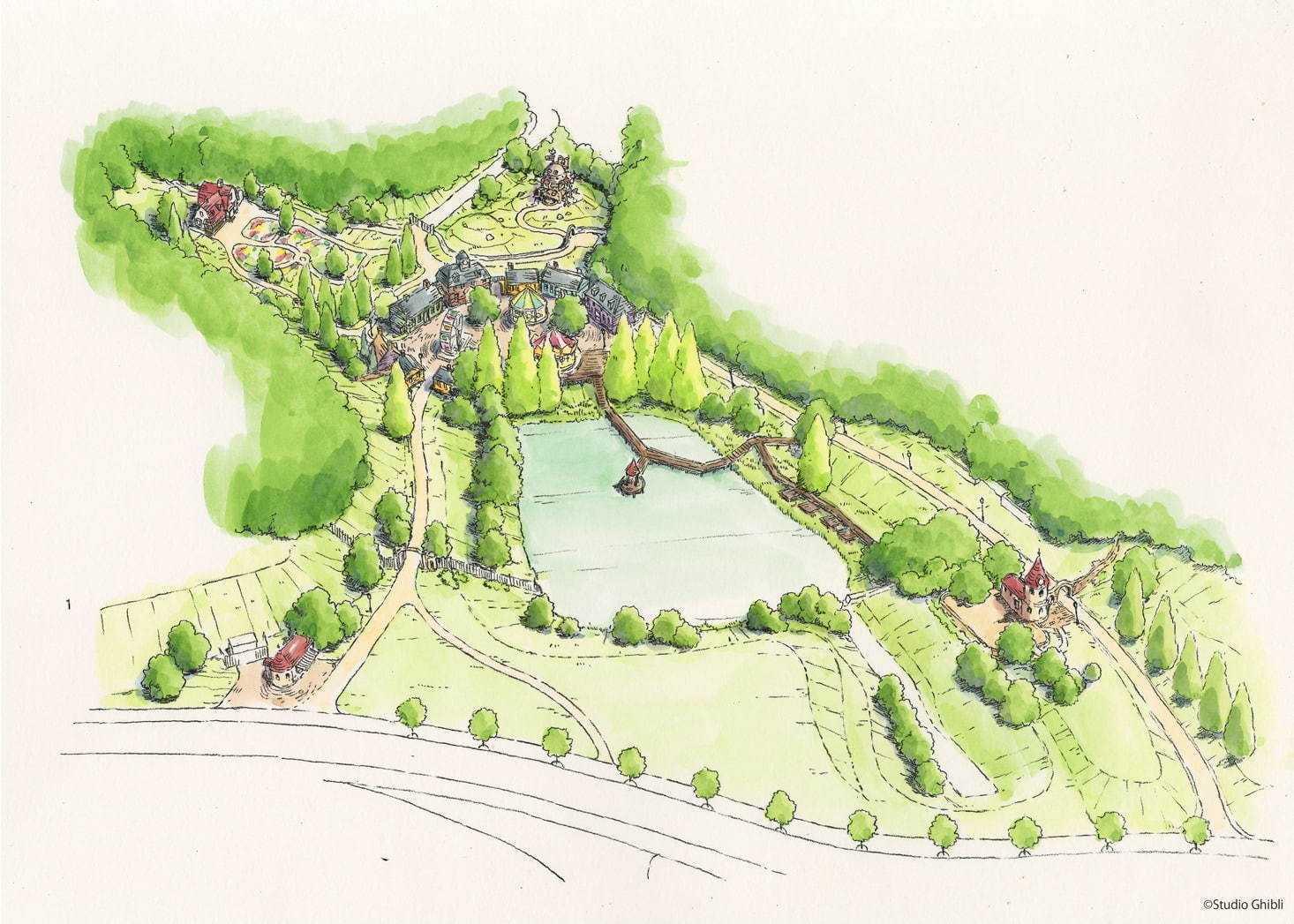 Finally, the Valley of Witches draws inspiration from two classics: Howl’s Moving Castle and Kiki’s Delivery Service (I think they also mentioned the newest Studio Ghibli film that was just awful, too).

Valley of the Witches is essentially a quaint European town lined with restaurants, parks, storefronts, and residences–such as Kiki’s family home. It’ll also have the bakery where Kiki works–and of course, you’ll be able to buy baked goods from the movie. 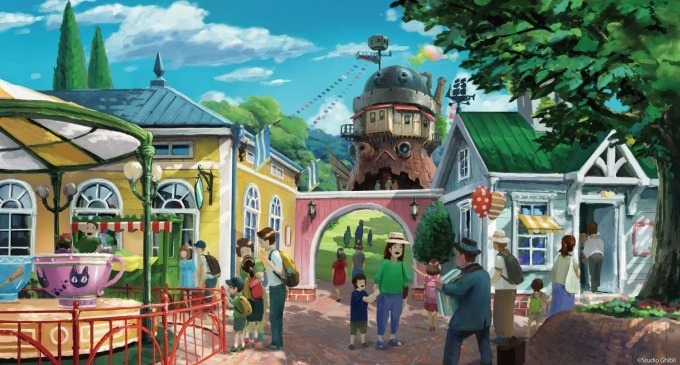 The city has improved infrastructure in the surrounding area, also adding 1,500 more parking spaces. (Although it’s likely the vast majority of visitors will arrive by rail.) 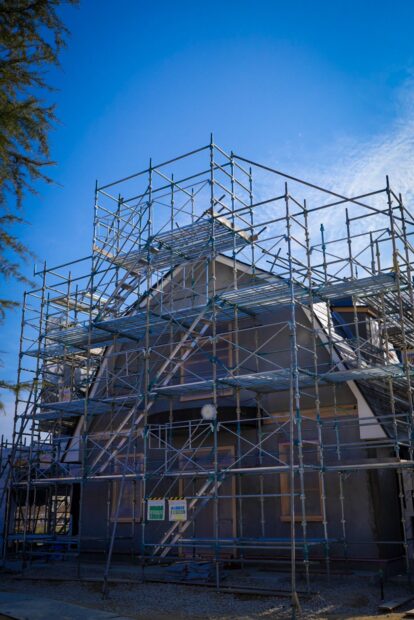 To put that into perspective, the record-setting Fantasy Springs expansion to Tokyo DisneySea will cost 250 billion yen (over $2 billion). The total cost of Ghibli Park is about on par with a headliner Disney attraction. 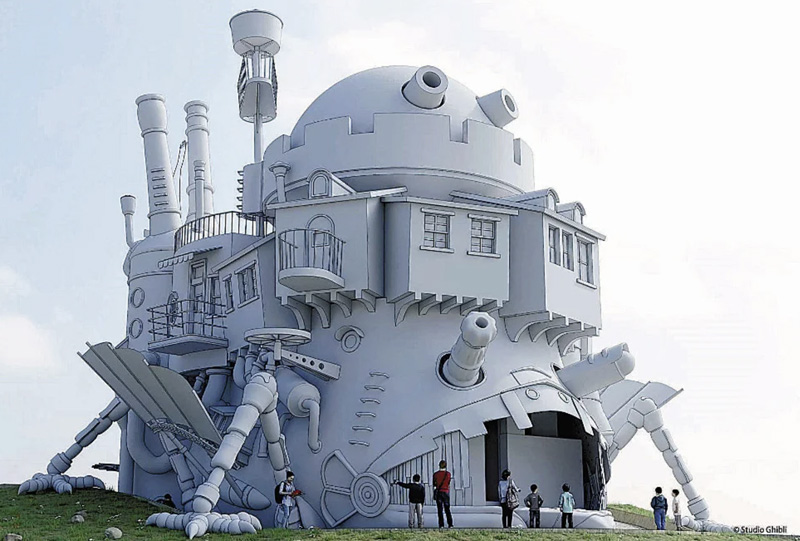 The difference is that rides are not the focus of the Studio Ghibli theme park. The name “Ghibli Park” is fitting, as the emphasis here is on the Ghibli-themed park. You won’t find any blockbuster thrill rides or elaborate attractions here. It’ll be more like World Showcase meets Busch Gardens Williamsburg, minus the rides.

To that point, Hayao Miyazaki and Studio Ghibli pledged to build this theme park without cutting down any trees or disturbing the natural environment. If the concept art is any indication, Ghibli Park looks like it’s always been there, with human developments coexisting with nature. The park was buildings built in clearings, with the goal of enhancing nature. That should be unsurprising to Studio Ghibli fans, as environmentalism and the downfalls of development are common themes/motifs of the films. 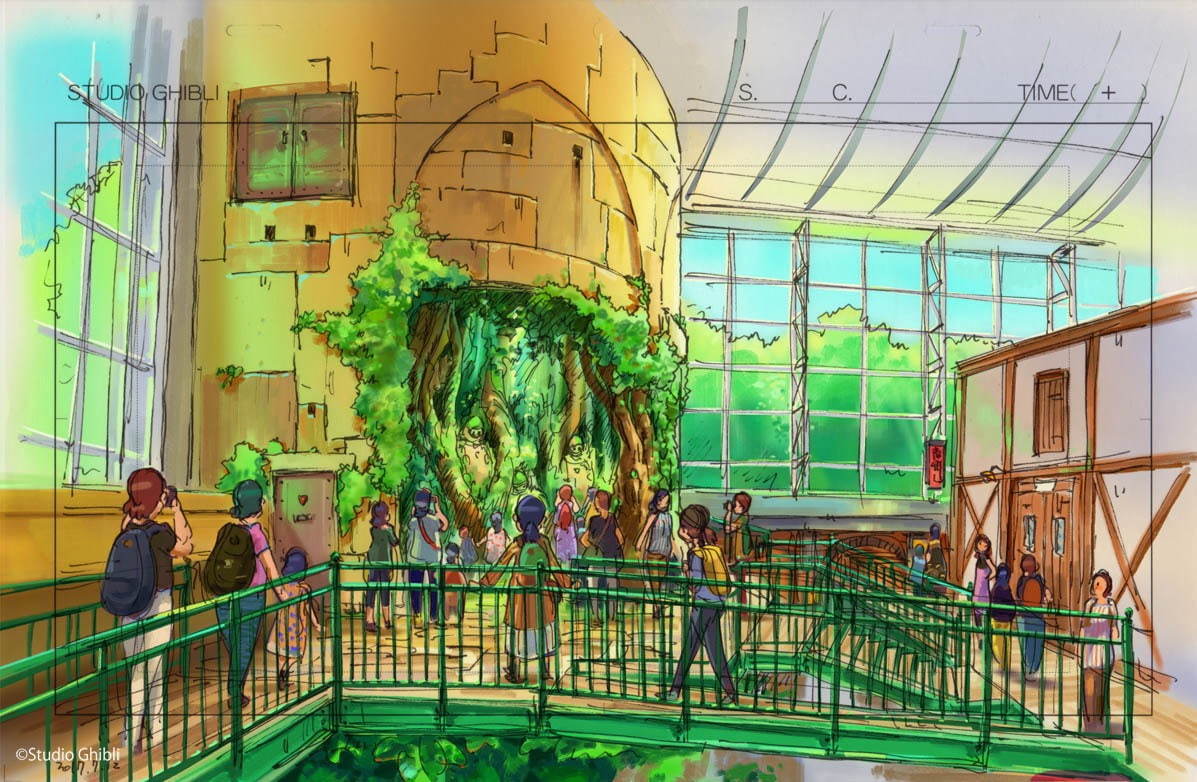 I’m cognizant of the fact this is a very niche topic, and will only appeal to a handful of you–probably quite literally. I’m writing about it as a “point of personal privilege” as it is incredibly interesting to me, relevant to the generalized topic of theme parks, and is newsworthy.

Honestly, I’ve been trying to come up with an excuse to cover Studio Ghibli on this blog for a while, and even drafted an (unpublished) list of my top 10 Studio Ghibli films back when HBO Max launched. As much as I love Disney and Pixar animation, I far prefer Studio Ghibli. I could go on and on about the differences in tone, style, messages, and much more–I’ll spare you all of that. 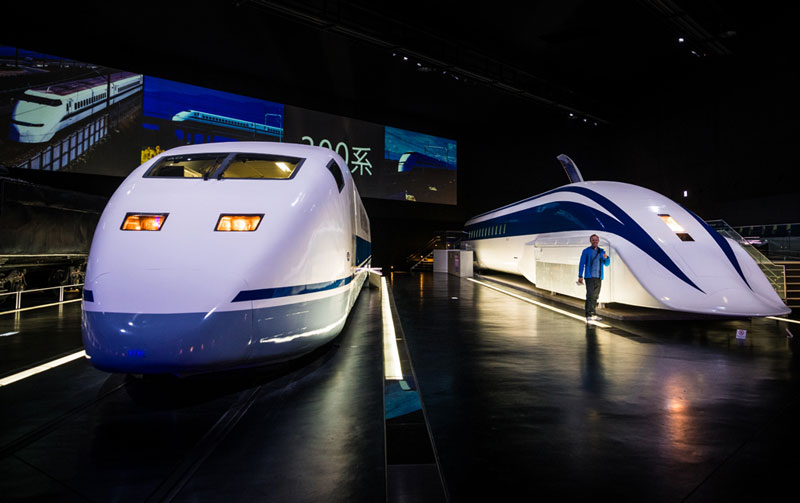 Despite the studio depriving my dream of playing in a Catbus, we’ve also visited the Ghibli Museum on multiple occasions. It’s incredible and a destination we recommend to everyone visiting Tokyo.

We’ve also spent a good amount of time in Nagoya, and highly recommend it as a stopover between Tokyo and Kyoto. Nagoya is actually home to my favorite museum in the entire world, and also has a ton of great food–especially if you like eel. 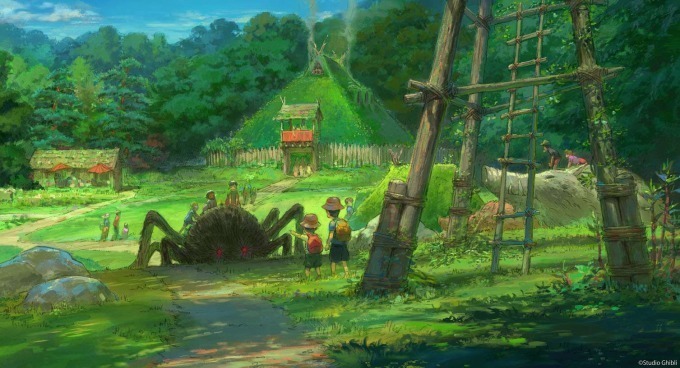 As someone who loves simply wandering around theme parks and not necessarily doing anything–just being there for the sense of place–this looks like it’ll be right up my alley. In fact, one of our favorite things to do in Japan is simply wander–walk down a quiet path, hike up a mountain temple, or peruse a secluded alley in quaint parts of town.

When it comes to Japan, I’m not alone in this sentiment. It seems like the top demographic for railroad museum annual passes is older people who go there to fall asleep on trains (hashtag goals) and slowing down to simply enjoy being present in a place is incredibly common. To be sure, Ghibli Park will be significantly different from Universal Studios Japan or Tokyo Disneyland, but it’ll have a huge audience among the Japanese. Presumably, the same will be true with Studio Ghibli fans. We absolutely cannot wait.

Planning a trip to Tokyo Disney Resort? For comprehensive advice, the best place to start is our Tokyo Disneyland & DisneySea Trip Planning Guide! For more specifics, our TDR Hotel Rankings & Reviews page covers accommodations. Our Restaurant Reviews detail where to dine & snack. To save money on tickets or determine which type to buy, read our Tips for Saving Money post. Our What to Pack for Disney post takes a unique look at clever items to take. Venturing elsewhere in Japan? Consult our Ultimate Guide to Kyoto, Japan and City Guide to Tokyo, Japan.

What do you think of this Studio Ghibli theme park? Does the idea of this–a theme park with an emphasis on the park part–appeal to you, or does the lack rides make it a non-starter? Would you consider visiting Ghibli Park during a trip to Japan? Are you a fan of Studio Ghibli films? Do you agree or disagree with our assessment? Any questions? Hearing your feedback—even when you disagree with us—is both interesting to us and helpful to other readers, so please share your thoughts below in the comments!