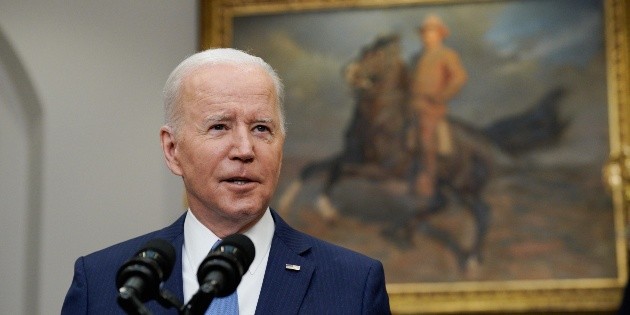 the president of United States, Joe Biden, consider that there is a “clear possibility” that Russia will invade Ukraine in February and he communicated this to his Ukrainian counterpart, Volodímir Zelenski, during a telephone call on Thursday.

“President Biden He said that there is a distinct possibility that the Russians could invade Ukraine in February.”White House National Security Council spokeswoman Emily Horne wrote on her official Twitter account.

The spokeswoman spoke in this way after denying information published by the CNN network, which quoted an official Ukrainian source according to which Biden had told Zelensky that it was practically confirmed that Russia would invade Ukraine once the ground was frozen, and that it could “plunder” Kiev.

Horne crossed out that version of “completely false” and said that Biden had only communicated his impression that it was possible, but not certain, that Russia would invade the country in February.

In his call with Zelensky, Biden “reaffirmed the readiness of the United States and its allies and partners to respond decisively if Russia invades” Ukraine, according to a White House statement.

The US president told Zelensky that he is evaluating the possibility of granting “additional macroeconomic support to help the Ukrainian economy, given the pressure that has resulted from the increase in Russian military forces” on the country’s borders.

Biden also made it clear that “despite the departure of American family members and diplomatic personnel, the United States Embassy in Kiev remains open and fully operational,” the White House said.

The US State Department on Sunday ordered the families of employees at its embassy in Kiev to leave Ukraine and authorized the departure of non-essential personnel amid the “continued threat of military action by Russia.”

In addition, this diplomatic legation urged Americans in Ukraine on Wednesday to think about leaving the country “now” before the “growing threat of Russian military action”.

Zelensky tried to defuse the situation on Tuesday, denying that these evacuations of diplomatic personnel mean an “imminent escalation” of the conflict with Russia.

On the call, both stressed the principle of not deciding “nothing about Ukraine without Ukraine”, in the context of negotiations with Russia on its security requirements.

“President Biden expressed United States support for efforts to resolve the conflict in the Normandy format, and expressed hope that the parties’ January 26 commitment to the terms of the July 2020 ceasefire will help to reduce tensions and promote the implementation of the Minsk Agreements,” the White House concluded.