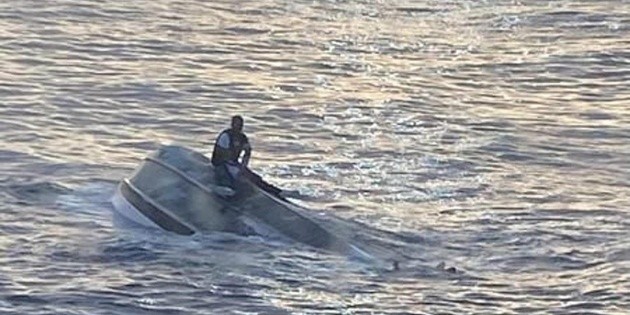 The US Coast Guard reported this Thursday the discovery of four lifeless bodies during the search operation for survivors of the shipwreck of a boat with immigrants off the coast of Florida.

Thus, There are already five confirmed victims of the shipwreck occurred last Sunday, which was learned from a survivor rescued on Tuesday.

During a press conference offered today, Captain Jo-Ann Burdian, commander of the Miami sector in the Coast Guard, after expressing his condolences to the relatives, reported that the four bodies were found in the last 24 hours, but he did not provide further details.

Similarly, he added that the operation will most likely be suspended by the end of this afternoon, unless they obtain “additional specific information” that can narrow the search.

“We don’t think there are likely to be more survivors,” the officer acknowledged.

The Coast Guard troops have covered in the last 48 hours an area comparable to the surface of the state of New Jersey, that is, 22,500 square kilometers, in which a search has been carried out by sea and air.

As announced today, three Coast Guard ships, two boats from this institution, two US Navy ships and six planes have been used in the operation that began on Tuesday.

The only survivor, a 22-year-old man who stayed afloat on the hull of the capsized boat, said the boat capsized shortly after he and 39 other people left Saturday night for Florida from the island of Bimini, in the Bahamas.

The young man is in “stable” condition in a Florida hospital, and in the custody of US immigration authorities.

The ship 7.6 meters long capsized due to bad weather and storm surge, according to the Coast Guard.

The official Anthony Salisbury, of the National Security Investigations Agency (HSI), said in his turn that the case is treated as a criminal investigation into a possible smuggling of undocumented.

The investigation is in its initial phase, however the case could lead to charges for “human trafficking with death”, according to the federal authorities, who refrained from informing about the nationalities of the occupants of the boat and other relative details.

In a statement to the channel Miami Telemundo 51, the mother of the only survivor, a Hispanic woman who identified herself as Marcia, revealed that she was able to talk to her son on the phone and that he told her that there were minors and even babies on the boat.

The woman revealed to the media that her 18-year-old daughter is also among the disappeared, whom she already considers dead, according to the story told by her son.

“He clung to what was left of the boat, as seen in the photo,” explained the woman about the circumstances in which her son managed to save himself and described it as a “miracle.”

The mother asked the US immigration authorities for “understanding” and to release her son.