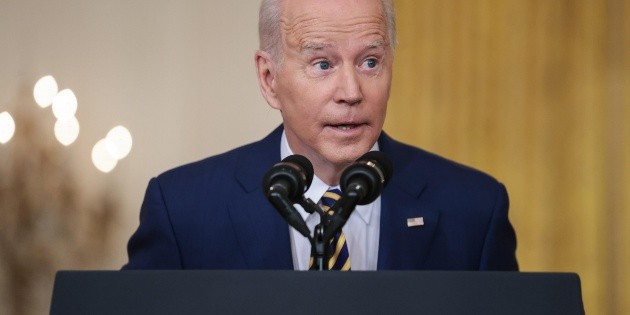 US President Joe Biden said Wednesday that “it will be a disaster for Russia” if it finally decides to invade Ukraine and reiterated his threats of strong economic sanctions.

Putin “has never seen sanctions like the ones I have promised will be imposed if he moves” towards Ukraine, Biden said at a press conference on the first anniversary of his coming to power, which falls on Thursday.

The US president warned that Moscow will be held accountable, although he clarified that the measures that the US and its partners adopt they will depend on the type of military intervention that Russia chooses to make.

“It’s one thing if it’s a minor incursion and we end up arguing (in NATO) about what to do and what not to do, but if (the Russians) do what they’re capable of doing with a massive force on the border, it’s going to be a disaster for Russia,” Biden warned.

In that sense, he clarified that the US and its allies are prepared to “impose a severe cost and significant damage” to Russia and its economy.

“If they invade -he underlined- they are going to pay, their banks are not going to be able to make transactions in dollars”.

However, he stressed that it depends on what Russia finally does: “I want to be clear that with the imposition of serious sanctions related to transactions in dollars (…) there is going to be a negative impact on the US as well as on economies in Europe, as well as a devastating impact on Russia.

“So I’m going to make sure everyone is on the same page as we move forward.” when it comes to sanctioning Moscow, Biden remarked.

In parallel, the US president said that Washington is going to help “fortify” its NATO allies in Eastern Europe: “We have already sent some 600 million dollars in sophisticated defense equipment to the Ukrainians.”

Biden also considered that beyond the cost of lives in the Russian ranks, no matter how much Russia gets away with it, it will be strong, real and consistent.

Despite these threats, the US president sees that there is still room to negotiate with his counterpart, Vladimir Putin, who asks for guarantees that Ukraine will never be part of NATO and that there will be no “strategic weapons station” of the Atlantic Alliance in Ukraine.

“We can work on something for the second”, said Biden, who regarding the first point highlighted that there are international treaties and in Europe that indicate that one chooses who he wants to be with.

“But the probability that Ukraine will join NATO in the short term is not very likely,” he stressed.