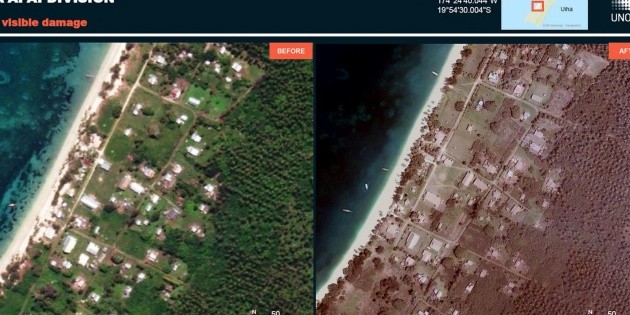 Some 84,000 people, more than 80% of the population of the Tonga Islands, have been affected by the Tonga-Hunga Ha’apai volcano eruption and subsequent tsunami, the UN said on Wednesday, adding that evacuations from the islands were in process.

“All the houses have apparently been destroyed on Mango Island and only two houses remain on Fonoifua Island,” while “significant damage has been reported in Nomuka”UN spokesman Stéphane Dujarric said in New York.

“The evacuation of people from these islands is underway”, he added.

In addition to the three deaths recorded so far, “injuries have also been reported,” the spokesman said without specifying the number.

Among the most urgent humanitarian needs are drinking water and food, in addition to the restoration of telephone and Internet connectionsDujarric specified.

“Relief efforts have been intensified, but it is difficult to reach remote areas to assess people’s needs and provide assistance,” he also said, referring to “logistical challenges” and the problem of the very strict anticovid protocols in the Islands. Tonga, which could complicate the dispatch of humanitarian personnel.

The UN has 23 officials on site, 22 nationals and one foreigner., all mobilized in the work of helping the victims of the eruption of the volcano and the tsunami.