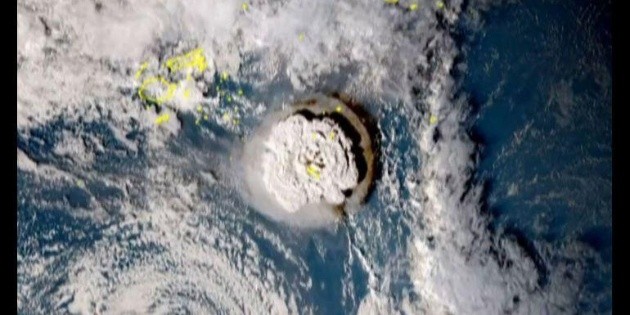 After this Saturday there was a tsunami on the island of Tonga as a result of the eruption of the submarine volcano Hunga-Tonga-Hunga-Ha’apai, Various videos circulate where you can see the increase in waves and the unusual behavior of the sea in different parts of the Pacific.

After the various reports National Civil Protection as well as the dependencies They have issued alerts to prevent the population from entering the sea or staying in a nearby area where there is water.

Some streets of Santa Cruz in California looked flooded, due to the overflow of the sea.

The consequences of the tsunami also reached the shores of Coquimbo in Chile.

Sea off the coast of Coquimbo begins to recede.
Onemi calls to calmly evacuate the beach areas. As long as the State of Precaution does not change, people should not enter or approach areas where there is water. pic.twitter.com/G5BfoBL3KU

“The violent eruption a few hours ago of the Hunga Tonga-Hunga Haʻapai volcano captured by the GOES-West and Himawari-8 satellites,” the post reads.

The violent eruption a few hours ago of the Hunga Tonga-Hunga Haʻapai volcano captured by satellites GOES-West and Himawari-8. pic.twitter.com/PzV5v9apF6


They affect the coasts of Mexico

The National Coordination of Civil Protection of the Government of Mexico reported that the tsunami in Tonga generated the increase in tide in nine ports in Mexico, including Puerto Vallarta, Jalisco, where the level rose half a meter.