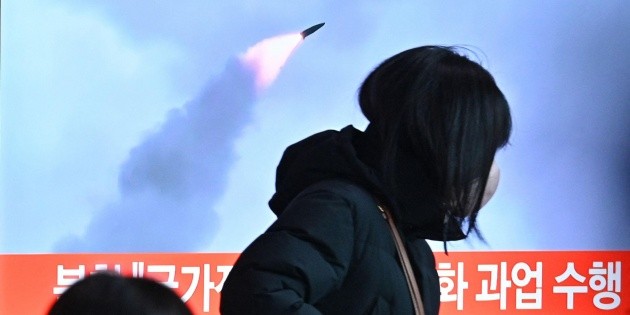 The North Korean media announced today that the projectile that the regime tried on the eve is a hypersonic missile that hit a target located “a thousand kilometers” away and that the test was chaired by leader Kim Jong-un, who had not been present at a weapons test for almost two years.

According to the Rondong newspaper, the missile’s hypersonic gliding warhead “traced” its trajectory after traveling 600 kilometers and “executed a sharp turn maneuver of 240 kilometers” before “hitting the target in waters 1,000 kilometers” from the launch point in the Sea of ​​Japan.

The article adds that Kim Jong-un “observed the hypersonic missile test conducted at the National Academy of Defense Sciences”, marking the first time the North Korean marshal has been present at a missile test since March 2020.

Photos Posted by Rodong Show Kim following the development of the test from a control center located inside a large vehicle in the company of Jo Yong-won, who together with the leader is one of the five members of the presidium of the Politburo of the Workers’ Parties.

The piece adds that “the objective of the test was the final verification of the general technical specifications of the hypersonic weapon system developed” and that thanks to the test “the excellent maneuverability of the hypersonic combat glider unit has been more clearly confirmed”.

On the eve, the South Korean army described what was launched by North Korea as a ballistic missile that traveled about 700 kilometers and reached a maximum speed of around Mach 10 (10 times the speed of sound).