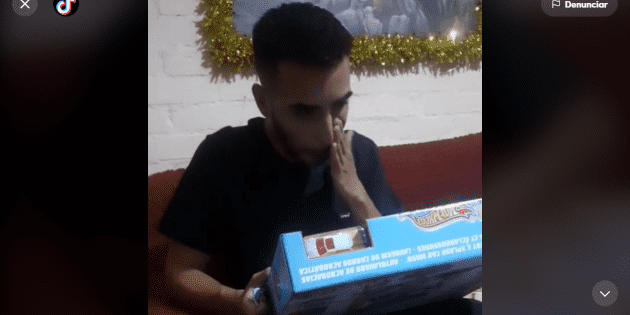 The tender moment when a young man receives an unexpected gift at Christmas becomes viral from TikTok, where a mother shared the moment her eldest son reacts to discovering that he was under the wrap that toy that I had not received as a child.

“My eldest son always wanted this gift as a child”, explains in the video the mother named Gricelda, a native of Arica (Chile) and who points out that then did not have enough resources so that the gift you dreamed of every Christmas become a reality.

In the images you can see how the young man begins to remove the wrapping with great emotion while he laughs out loud when he does not believe his mother’s announcement, “seriously?”, He questions and quickly his face is transformed when discovering what was hidden under the paper: The Hot Wheels stunt car wash.

After discovering that it was not a joke, the young man admires the unexpected gift and brings one of his hands to his face trying to dry one of the first tears that the tender detail of his mother causes him; “and at 25 he cried like a child of emotion and me too ”, concludes Gricelda.

The young man’s reaction immediately caused a sensation among the users of TikTok who said they were moved by the gesture of a mother who was finally able to give her son the gift he had always dreamed of and had to several netizens also on the verge of tears; “Crying over strangers is my passion,” says one user.