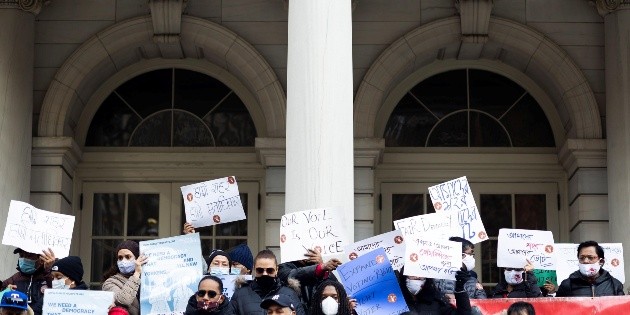 The Municipal Council of the City of New York, with a Democratic majority, yesterday voted in favor of a bill that grants the right to vote in municipal elections for holders of a green card or residence card card”And the holders of work permits, which are estimated to benefit some 900 thousand people, many of them Latino.

The list of those They will be able to vote in the next local elections -but not of the state- It includes those receiving the Deferred Action for Childhood Arrivals (DACA) program, known as “dreamers,” and immigrants who benefit from Temporary Protected Status (TPS).

With this historic vote, which was rejected by Republicans but was greeted with applause and cheers by immigrants and activists from a broad coalition of organizations, New York joins a dozen cities that already have this benefit for their legal residents. .

This measure could shelter around 1 million foreigners residing in New York, out of a total of 9 million inhabitants.

The cultural and economic capital of the American East, a democratic and progressive bastion, adopted the measure when debates are recurrent in the country about access to the vote for minorities.

Several states have taken steps in recent months to use unsubstantiated allegations of fraud in the 2020 presidential elections to pass laws intended, according to their detractors, to restrict these voting rights.