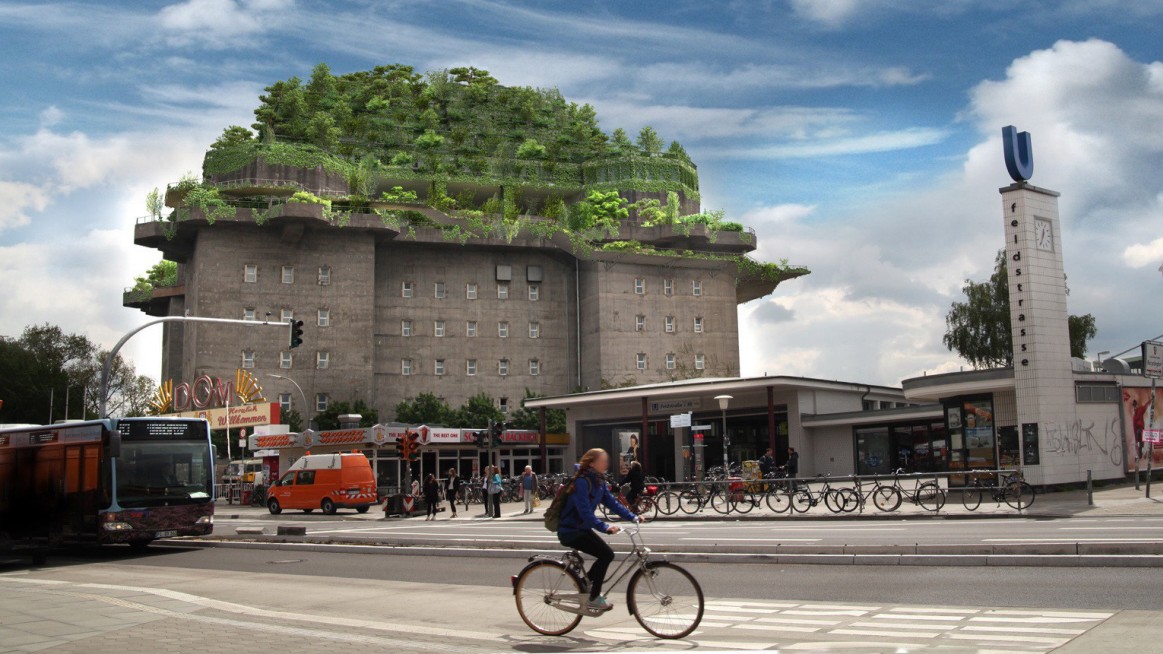 The former flak bunker in the heart of St. Pauli has been expanded by five pyramid-like floors since 2019 – currently one of the most interesting construction sites in Germany. The supporting structure weighs a total of around 33,500 tons, which is the weight of 60 fully loaded Airbuses A 380 is equivalent to. The new floors increase the listed concrete block, which provided protection for up to 25,000 Hamburgers during the Second World War, by around 20 to 58 meters. The shell will be finished soon, recently the top ceiling was concreted.

The opening was planned for this year. First the pandemic with its restrictions overturned the schedule, now delivery difficulties and a shortage of building materials are slowing the logistically complex project. The architects also changed. The phase 10 planning office from Freiberg in Saxony is now overseeing the project.

How should it look up there? “A little wild, a little disheveled”

A hotel, several restaurants and a three-field hall for school sports and cultural events will be created. Rooms for district culture, exhibition areas and accommodation for scholarship holders and artists are also planned. A memorial and information center for the victims of the Nazi regime and the Second World War will be created in the former control center and on other areas.

The roof garden, which is freely accessible to the public, will particularly attract attention. At a height of almost 60 meters, more than 7600 square meters of green and communal areas will be created by Landschaftsarchitektur + Holzapfel-Herziger & Benesch. In addition, 1400 square meters of facade area will be greened.

A 300 meter long, five meter wide “green mountain path” secured with a railing leads upwards. It meanders from the main entrance around the outside of the bunker to the roof. Here, Hamburg residents and their visitors will be able to enjoy a wide view of the city, the harbor, the Elbphilharmonie, the Harburg mountains and the Alte Land.

Half of the 24 steel support arms required have already been installed. Each weighs around 5.5 tons and is attached to the outer facade with several two to three meter long threaded rods. The ground foundation of the later path is formed by about 20 centimeter high prestressed concrete slabs with an additional 24 centimeter high structure. Visitors can also reach the city garden using two new external elevators on the east side of the building. Access is barrier-free.

The project is a prime example of successful citizen participation

The terraced garden will also be green in winter, so 4,700 trees, bushes, hedges and climbing plants were planted. Species that are mainly native to northern European and Alpine regions and can withstand frost, heat and storms at a height of more than 50 meters, says Frank Schulze, spokesman for the bunker project. “A French garden wouldn’t go with St. Pauli. So it will look natural and unspoilt here on the bunker roof, a little wild, a little disheveled.”

The plans for the former Flakturm IV are extraordinary in many ways. This is also due to the dimensions: the footprint of the monolith is 75 by 75 meters. And: The building project is growing from below, so to speak. The realization is a prime example of successful citizen participation. Since 2014 residents, architects and those interested in monuments have been working on the implementation in the non-profit residents’ initiative Hilldegarden. The project was informed, discussed and invited to participate at a large number of public events and ideas workshops.

The estimated renovation costs of around 46 million euros and the maintenance of the building will be borne by the leaseholder and builder Matzen Immobilien KG and financed through the new rental space. There will be no direct public grants from the city for construction and operation.

The company leased the bunker from 1993 to 2053. The term of the leasehold contract was extended to 2067 against the provision and maintenance of the public parking and usable areas. The bunker remains in the administration of the leaseholder or his company EHP. An urban development contract ensures this status for the entire duration of the long-term lease.

The hotel in the bunker is said to have 136 rooms

As it became known a few weeks ago, the planned hotel in the addition of the bunker will be given a new operator. The Hamburg-based RIMC Hotel & Resorts Group is to operate the hotel and the catering areas. In September she signed the contract with the landlord EHP and the client Matzen Immobilien. EHP had put the operation out to tender after the cooperation with NH Hotel, which was contractually agreed in autumn 2019, was terminated in June 2021 due to the corona crisis. Which brand will be used on St. Pauli should be announced as soon as possible. It is important that the new hotel operator “fits authentically into the vibrant creative scene in the area,” says project manager Paul Hahnert.

With currently more than 30 hotels in eight countries and more than 2000 employees, the RIMC Hotels & Resorts Group is one of the largest hotel companies in Europe. The group operates, for example, the Camp de Mar on Mallorca, the Sheraton in Offenbach and the Hotel Timmendorfer Strand. The accommodation in the Hamburg bunker is said to have 136 rooms.