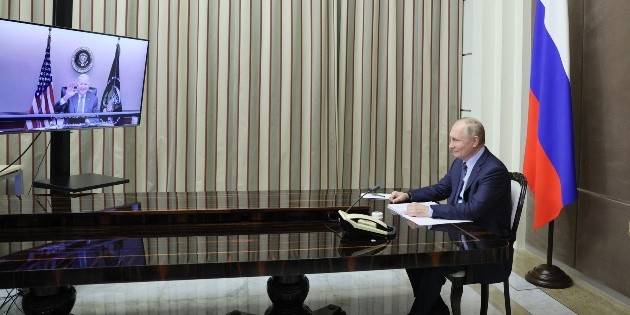 The presidents of Russia, Vladimir Putin, and the United States, Joe Biden, today concluded their virtual summit after just over two hourss of conversations.

During the summit by videoconference, of which details have not been disclosed so far, the main topic on the agenda was the tension around Ukraine.

Meanwhile, according to the White House, Biden will call the leaders of France, Germany, Italy and the United Kingdom on Tuesday at the end of the meeting with the Russian leader.

The purpose of the call will be to update his European allies on the content of his conversation with Putin, especially regarding Ukraine, and will include the French president, Emmanuel Macron; the german chancellor, Angela Merkel; and the Prime Ministers of Italy, Marior Draghi, and the United Kingdom, Boris Johnson.

The Kremlin only released images of the initial greeting between the two leaders, which had been seen in person last June during a summit in Geneva.

“I greet you, Mr. President,” Putin said sitting in front of a big screen, after which he gave the floor to Biden.

The Kremlin spokesman, Dmitri Peskov, explained that the videoconference took place through a closed communication channel “that allows us to talk about the most secret topics.”

This has been the fifth contact between the two leaders, between summits and telephone conversations, since Biden took office earlier this year.

Both parties hoped that the conversation would ease the tension around Ukraine, on whose border Russia would have concentrated tens of thousands of forces with the objective, according to the West and Kiev, of invading the neighboring country in early 2022.
Last week Putin proposed a security pact to NATO, which includes binding legal guarantees that it will never accept Ukraine and Georgia into its bosom.