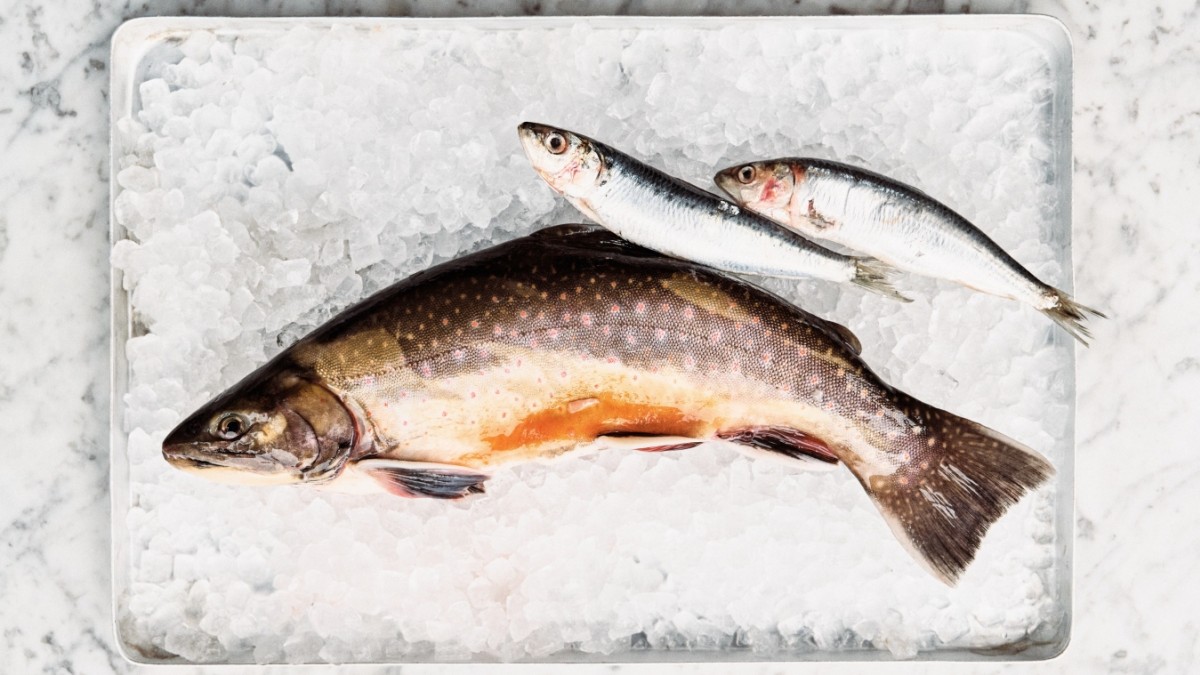 Thomas Imbusch went fishing as a young boy. He grew up in the country and knows from experience that the best catch is made when your fingers are almost frozen blue: “The colder it is, the better the quality – that has to do with the nutritional physiology of the fish,” says In the Bush. Today he runs his own restaurant 100/200 Kitchen on Hamburg’s Elbbrücken, where he prefers to process local food. And already at the end of the summer vacation he starts to look forward to winter. “Now we can fall back on fish and seafood from the north,” he says. “At this time of year you are at the peak of the year and in our kitchen in a few hours by car from the boat.” For example turbot from the North Sea, which a fisherman catches for him off Heligoland. Or the scallops collected by divers from the Danish Limfjord, which are only available when the sea is not too stormy for small fishing boats in winter: “These are products that are updated every day, they either come or they don’t,” says Imbusch.

Fried wild oysters with a raw core, with pickled vegetables

The last European wild oysters also come from the Limfjord, which Imbusch deep-fried so carefully in a wafer-thin coat of breadcrumbs that the core remains raw. He serves them with a dense, opulent salad of pickled and fermented vegetables in summer, especially tomatoes and pointed peppers, with algae and candied citrus fruits. A pleasure, so very different from what tourists experience at the fish market with fish rolls and a waterfront feeling.

When the ladle of mayo claps the salmon there early in the morning, it has little to do with tradition. The truth beyond tourism advertising is: Just because Hamburg is on the water does not necessarily mean that you will be served good fish cuisine. You have to know the right addresses, especially the legendary Fischereihafen restaurant with a view of the Elbe, an icon of Hanseatic hospitality. And of course young chefs like Imbusch who consciously rely on sustainability and products from the region. In the 100/200 Kitchen, where you can see the post-industrial port landscape through huge windows, the 33-year-old will again be offering his “Water & Salt” menu from the beginning of January, which is all about fish and seafood.

Since so many wind farms have been in the North Sea, the little fishermen have been getting more involved

Anyone who cooks so consistently according to the season needs an excellent fishmonger. For Imbusch there is no one better than Karl Niehusen from Hummer Pedersen: “An absolute expert.” Niehusen’s family runs the traditional business at the harbor, where the seagulls screech and the water is just a few steps away. For him, the North Sea has become an exciting area again in recent years: “Since there have been so many offshore wind farms there, the large trawlers can no longer fish with their trawls, the stocks have recovered. Today, more and more small fishermen are coming back Zug that also respect the closed seasons, “says Niehusen.

Sole and turbot, cod and saithe from the North Sea are now top for the experts: “In winter the fish prepare for the new spawning season, when they are at their peak when it comes to fullness and protein.” And the local lobster that is fished off Heligoland is even better for him than the one from Brittany: “The North Sea has colder temperatures, there are more nutrients in the water.” Local shellfish are the ultimate Christmas classic for many hamburgers. If you order for a party at Hummer Pedersen’s shop, you can fortify yourself right next door in the modern bistro with a show kitchen and large glass front – with fish soup, grilled shrimp or, as is typical of the region, Hamburger panfish with fried potatoes, cucumber salad and mustard sauce.

The most atmospheric address to enjoy fish in the Christmas season is not at the port, but at the Inner Alster. In the traditional Hotel Vier Jahreszeiten, the facade is decorated for Christmas, with lots of pine green and festive lights. Inside, in the Jahreszeiten Grill, traditional Hanseatic dishes are served in the original Art Deco ambience from 1926 – the perfect place to order a seafood cocktail with crunchy Büsum shrimp, frisée salad and a deliciously seasoned cocktail sauce. Or a couple of fresh oysters on ice that are not flown in from Brittany but come from Sylt – the “Sylter Royal” is grown there in one of the northernmost oyster farms in Europe. In the Jahreszeiten Grill, the service has also mastered the art of professionally filleting a North Sea sole for two people, which was cooked whole with butter and herbs, at the table in front of the guests.

But if you are in the mood for fish sandwiches when visiting Hamburg, you should try the iconic Underdocks on St. Pauli. The young operators want to save the Hamburg fish stall culture, and they have even received an award from the Federal Ministry of Economics for their creative concept. In the rough harbor ambience with a container in the room and fur seal graffiti on the wall, they serve witty creations like “Crunchy Backfisch Taco” – juicy cod loins in a crispy coat with fresh salad and mild, well-seasoned tartar sauce. “We offer gourmet street food and see you somewhere between snack bar and fish restaurant,” says co-founder Burhan Schawich. The good old fish sandwich appears as a “roll” on the menu, with salmon, crayfish or even deluxe with lobster.

Kiezgoers will find another young concept around the topic of fish and seafood just a few hundred meters away near the Große Freiheit: the XO Seafoodbar. It is deliberately uncomplicated here, all dishes are served on small plates to share. Although it’s a eatery, owner Fabio Haebel calls it a “bar”: “That sounds more relaxed, and I consciously wanted a bar atmosphere.” He runs the restaurant in a strictly sustainable manner: “Everything from the fish is used, including the innards and bones.” That’s why there is cod liver (a delicacy!) On the menu, the bones in turn are placed in fish stock and, when crispy, make an original treat on the plate.

Haebel also relies on high-quality products from the local area. The plaice was fished off the coast of Fehmarn, Förde prawns are served here sometimes as tartare with tomato oil, sometimes as carpaccio with raw asparagus strips and an intense sauce made from the carcasses. And what do you drink with it? Haebel also has a good wine list, but the highlight of the restaurant are creative cocktails that are matched to the dishes. The bartender mixes a pineau sour with verjuice, orange shrub and vanilla bitter to go with grilled razor clams with spinach and stone mushroom velouté. And with the fried sardine sandwich, he recommends the Tequila-based Pasilla Paloma, which buffers the greasiness of the fish with the citrus freshness of lime and grapefruit. Cool comfort food, sustainable approach and hot drinks – this is how contemporary Hamburg fish cuisine works.

Bistro Hummer Pedersen, the freshest fish to buy or to enjoy in the bistro hummer-hamburg.com