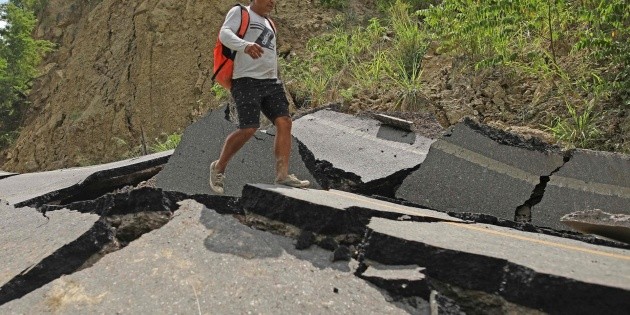 A 3 year old boy who lived in the province of Condorcanqui is the first dead reported as a result of the 7.5 magnitude earthquake registered yesterday in Peru, regional authorities reported this Monday.

“Some 50 wooden boards three meters long by seven centimeters wide fell due to the shaking on the little boy and caused a multiple trauma,” Elías Bohórquez, regional director of Health in the northern region of Amazonas, told RPP Noticias.

The earthquake caused a violent shake that knocked the wooden planks stored in the house where the minor lived with his family in an indigenous community in Condorcanqui.

Bohórquez indicated that 12 health facilities are completely inoperative, out of a total of 26 affected by the earthquake in that jungle region.

According to the latest report from the National Emergency Operations Center (COEN), more than 2,400 people were affected by the earthquake, while 16 were injured, one of them with head trauma.

The affected population has been left homeless, since the earthquake destroyed 117 houses and left 376 homes uninhabitable due to irreparable damage.

Another 764 buildings were damaged with partial cracks, most of them rustic adobe constructions whose structure gave way to the earthquake.


The earthquake also destroyed five churches and a health center and damaged 19 other religious temples and 32 other health facilities, as well as 13 schools.

There is more of 1.5 kilometers of roads destroyed at various points and more than 5 kilometers affected by landslides and landslides that have blocked some of the main communication arteries of the Peruvian Amazon.

Although damages are registered in nine regions of Peru and in two localities in southern Ecuador, most are concentrated in the northern Peruvian department of Amazonas, where the epicenter was located, 98 kilometers east of the town of Santa María de Nieva.

The president of Peru, Pedro Castillo, has remained in the area since Sunday, who arrived at the most affected places to attend first-hand to the population and coordinate aid and evacuations.

“This whole area is totally collapsed (…) If we don’t get out, we are going to have dire consequences,” Castillo said while checking the state of a sector of the Fernando Belaúnde Terry highway, the most important in the Peruvian Amazon, which was destroyed. .