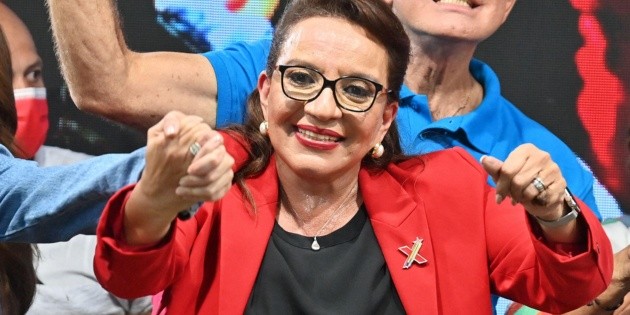 The candidate for the presidency of Honduras, Xiomara Castro, of the opposition Partido Libertad y Refundación (Free), leads in the first counts of the general elections held this Sunday, followed by the ruling party Nasry Asfura, according to preliminary results released by the National Electoral Council.

More than three hours after the closing of the voting centers and 16.01% of the minutes had been scrutinized, Castro, wife of the deposed former Honduran president Manuel Zelaya, achieved the 53.44 %, while Asfura, of the ruling National Party, obtained a 34.01, the CNE advisers indicated on the national chain.

Castro, who heads a de facto alliance, in the presidential formula, of Libre with the National Opposition Union of Honduras (Unoh), adds 297 thousand 714 votes, while Asfura 189 thousand 451, after 2 thousand 929 minutes were processed, said the Chairman of the CNE, Kelvin Aguirre.

In third place is Yanni Rosenthal, of the opposition Liberal Party, with 9.23 percent, which is equivalent to 51,446 votes, he added.

Activists from the National Party declared themselves the winners long before the voting ended, and after the first CNE report they indicated that they will continue the results until the last is counted, being certain that “the new president-elect is Nasry Asfura.”

If the trend continues, Castro, former first lady of Honduras, would become the first woman in governing the Central American country.

More than 3.2 million Hondurans they exercised their right to vote, which represents 62% of the more than 5 million qualified, said Aguirre, who congratulated the people for showing that they can “build a future in peace and democracy.”

Aguirre said that the electoral process “was successful” and stated that “no candidate can be declared the winner” until the electoral body processes all the minutes.

Hondurans elected in the elections the successor of Juan Orlando Hernández, who will conclude his second term on January 27, 2022.

They also voted for three vice presidents of the Republic, 128 deputies to Parliament, 20 to the Central American and 298 municipal corporations.