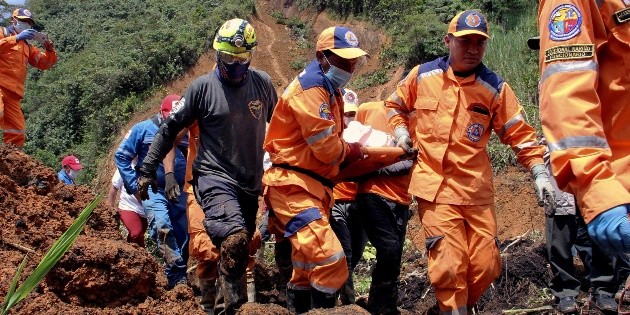 Ten people, mostly women who were in a hotel and a restaurant, died Tuesday trapped by a landslide in a municipality in southwestern Colombia hit by rains, according to an updated balance of relief agencies.

In the early hours of Tuesday, an avalanche of mud and stones buried an inn and a billiard in Mallama, a town of at least 7,000 inhabitants in the department of Nariño, near the border with Ecuador.

Eight women have been identified among the deceased, “some Venezuelans.”said this Tuesday Jader Gaviria, director of the Ungrd in Nariño.

According to the person in charge, nine victims were rescued, two of them “seriously injured” and “it is presumed that there are more people trapped.”

Rescue brigades with the support of excavators are early removing earth in search of more victims, while trying to enable traffic on a national road affected by the emergency.

Gaviria indicated that the avalanche was caused by the rainy season that affects a large part of the Colombian territory.