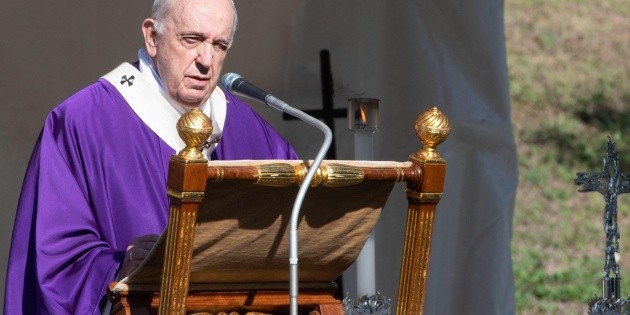 Pope Francis today called on the world to fight “in coordination” the fight against the environmental crisis and encouraged the richest countries to lead it and pay off “the ecological debt” with the poorest, in a message to the United Nations Summit for the Climate Change in Glasgow (COP26).

“Unfortunately we must bitterly confirm that we are far from achieving the desired objectives to combat climate change and we must say it honestly: We cannot afford it!” He urged in a message read by his Secretary of State, Pietro Parolin.

Francisco, particularly sensitive to this issue, warned that this battle implies “a change of era” for which the commitment of “everyone” is required, especially the richest countries, and asked to settle “the ecological debt” contracted with the most poor.

In his opinion, the most prosperous and industrialized countries “should assume a guiding role in the field of climate finance, the decarbonization of the economic system and people’s lives, the promotion of the circular economy and supporting countries. most vulnerable “to adapt to this scenario.

Because this, he warned, will mean “a true conversion, individual but also community”, towards a “more comprehensive and inclusive” development model.

Francisco, who dedicated his second encyclical, the “Laudato Sì” (2015), to this issue, He argued that in this task “particular care” should be given to the most vulnerable populations with whom over time “an ecological debt has been generated”.

This is due to “trade imbalances” between rich and poor and has implied consequences in the environmental sphere due to the disproportionate use of its natural resources in the same country or by third parties. “We cannot deny it,” he added.

And together with the ecological debt, Francisco also addressed the issue of the foreign debt, contracted by the States with foreign entities, “whose pressure often hinders the development of the peoples.”

“The post-pandemic can and should begin by taking into account all these aspects, also linked to the beginning of careful negotiated procedures for the cancellation of the external debt associated with a more sustainable and fair economic structuring, aimed at facing the climate emergency,” he proposed.

“Developed countries need to help resolve ecological debt significantly limiting the consumption of non-renewable energy and providing resources to the countries most in need to promote sustainable development policies and programs, “said Francisco, paraphrasing his encyclical.

Because the wound caused by the environmental crisis, together with the coronavirus pandemic, “are comparable to those of a global conflict.”

“Thus, as at the end of the Second World War, it is necessary for the entire international community to prioritize the adoption of collegiate, solidarity and long-term actions,” he said.

Finally, he claimed that “there is no time to wait” because the climate crisis is already causing suffering among the population., with special mention to children, and announced that “in the short future environmental migrants will be more than those fleeing conflict.”

“We must act with urgency, courage and responsibility,” said the Pope, who acknowledged that he would have liked to go in person to Glasgow but “it has not been possible.”