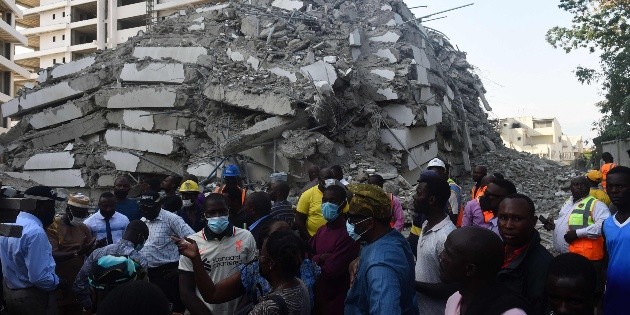 The death toll from the collapse of a skyscraper under construction in Nigeria’s economic capital Lagos on Monday rose to 20, rescue services reported Tuesday.

“We recovered another five bodies, which increases the balance to 20 dead. But the number of those rescued alive is still nine.”

In total, nine people were saved from the ruins of the 21-story building.said Ibrahim Farinloye, head of the National Emergency Management Agency (Nema).

“We recovered another five bodies, which increases the balance to 20 dead. But the number of those rescued alive is still nine,” he said.

Nigerian rescue teams They dug through the rubble for more survivors Tuesday.

Farinloye previously said that rescuers had been contacting survivors who were still trapped underneath the collapsed building, so construction workers fear dozens of their colleagues are inside.

The building was still under construction when it fell abruptly onto a pile of concrete slabs on Monday., in the Ikoyi neighborhood of Lagos.

The Lagos State Police said it is too early to determine the causes of the collapse, but the manager of the National Emergency Management Agency of Lagos, Femi Oke-Osanyintolu, explained that infractions had been committed in its construction and that they would investigate ” the matter to prevent it from happening again, “he said.