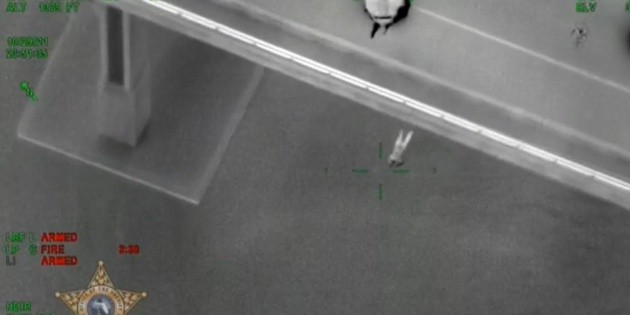 A man driving a stolen vehicle starred in a scene worthy of the cinema during a police chase, as jumped from a bridge about 17 meters high in southwestern Florida, in the United States.

Despite the big jump, captured by the camera of a police helicopterBryan Gray, 34, was taken from the waters of the Caloosahatchee River by the police and detained in prison, although he had previously passed through a hospital, local media reported Tuesday.

Helicopter camera video shows Gray’s van driving at high speed over the Edison Bridge and even crashing into the security barrier until it stops and a person is seen going to the barrier, crosses it and jumps into the river while several police cars appear on the scene.

According to a statement from the Lee County Sheriff’s Office, Gray’s van had been reported stolen.

When the police saw her circulating, they began a chase that ended in that set of bridges over the Caloosahatchee River.

The Fort Myers City Police Department helped capture the now detainee in the waters of the river.

In a statement, the sheriff’s office joked about the “gold medal” Gray could have earned in a divers’ championship if it were not held accountable for the theft of the vehicle.