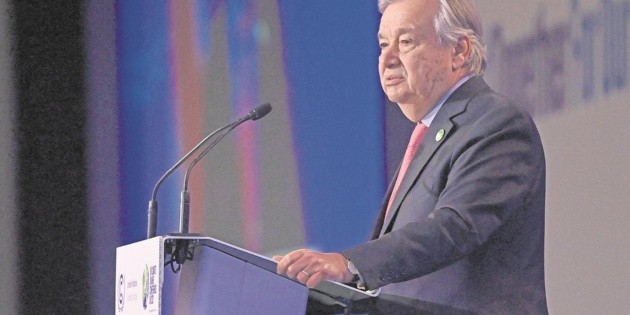 The Secretary General of the United Nations (UN), António Guterres, asked the international community to commit to cut CO2 emissions by at least 45% by 2030.

“It is time to say enough. Enough of brutalizing biodiversity, killing ourselves with carbon, treating nature like a latrine (…) and digging our own grave, ”said Guterres during the opening ceremony of the COP26 leaders’ summit. in the city of Glasgow.

Guterres called for ending “our addiction to fossil fuels, which is pushing humanity to the limit” and stressed that “recent climate announcements may give the impression that we are turning it around”, but “this is an illusion”, given that the planet is heading towards an increase in temperatures of 2.7 ºC by the end of the century.

“Although the recent promises are real and credible, and there are serious doubts about some of them, we are still approaching a catastrophe,” he added.

Guterres pointed out that there is “a credibility deficit and a surplus of confusion about reducing emissions, with different objectives and different metrics.”

They seek to stop deforestation

World leaders to commit to halt deforestation by 2030 thanks to 19,200 million dollars of public and private funds. The list of more than 100 signatories brings together countries such as Brazil, Russia or China.