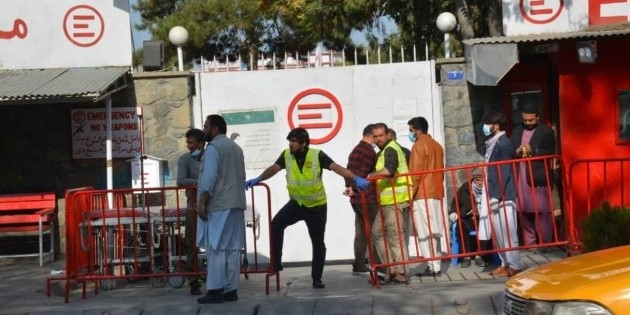 An explosives attack on Afghanistan’s largest military hospital left at least 19 dead and 50 wounded in Kabul, where the Taliban are facing a series of deadly actions by the rival jihadist group Islamic State.

“The attack was started by a suicide bomber on a motorcycle, who blew himself up at the hospital entrance”

The attack was claimed by the Afghan arm of the Islamic State group (IS-K).

In a statement published on the Telegram networks of the jihadist organization, IS-K, the main adversary of the Taliban in power, affirms that “Five IS fighters carried out simultaneous and coordinated attacks.”

Taliban spokesman Zabiullah had accused IS-K. “The IS attackers wanted to attack civilians, doctors and patients” of the Sardar Mohammad Dawood Khan hospital, the largest military hospital in the country, he added.

Mujahid pointed out that the Taliban ended the attack in 15 minutes after having sent “special forces” by helicopter to the roof of the building.

“The attack was initiated by a suicide bomber on a motorcycle, who blew himself up at the entrance to the hospital,” said a Taliban official who did not want to reveal his identity. Then armed men entered, he added.

“We heard a loud explosion at the first control of the hospital. They told us to go to safe rooms.”

“Nineteen bodies and around 50 wounded people have been taken to Kabul hospitals,” A health officer on his side pointed out, who preferred not to be identified.

These explosions are the latest episode in a deadly series of attacks in the country since the Taliban came to power in mid-August, clashed with the local branch of the Islamic State.

“We heard a loud explosion at the first control of the hospital. They told us to go to safe rooms. I also heard gunshots,” said a target.

“I can still hear gun shots inside the hospital building. I think the attackers are going room by room, like the first time he was attacked,” he added.