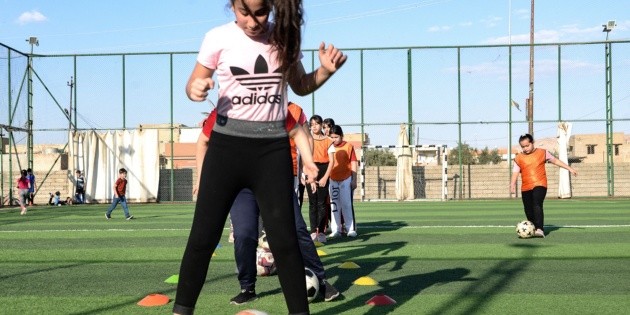 Motivated by their coach, Christian girls kick a ball on a court in the Iraqi town of Bartalla, a former jihadist stronghold where soccer allows them to dream of a better future.

“Here we do everything to teach girls the fundamentals of soccer”

In 2014, the Islamic State (IS) group seized control of the town during its swift offensive in the northern province of Nineveh, before subjecting its girls and women to its drastic interpretation of Islam.

Four years after the defeat of IS, the 1,500 families that returned to the town are trying to restore normality to Bartalla12 kilometers east of Mosul, which was the de facto capital of the jihadists in Iraq.

A soccer academy for girls, with an artificial grass pitch, opened its doors six months ago thanks to the financial support of Lara, an Iraqi Christian NGO.

“Here we do everything to teach girls the fundamentals of soccer,” said coach Joanne Yusef Chaba.

The 22-year-old coach, a physical education graduate, said that her dream is to “start a women’s team that can compete in the future” in one of the two women’s leagues established in Iraq.

Wearing colorful bibs, the girls do stretching exercises on the grass before Yusef Chaba blows the whistle to begin practice.

After an exchange of passes, one of the players controls the ball, dribbles and unleashes a shot that shakes the post.

“Coming here allows us to forget the difficult times,” said the coach, who fled to Arbil with her family two hours before the arrival of the jihadists in her city.

“Soccer is a relief … There is nothing else to do in the city. I look forward to training sessions.”

“Now when people see us, it gives them hope and confidence,” added the young woman, who is looking for paid employment. “Here we forget our daily worries.”

About 50 girls from 10 to 15 years old are enrolled in the academy, where they participate in training sessions twice a week.

Miral Jamal was six years old when he fled the jihadists with his family. Now 13, she is passionate about soccer.

“Despite the lack of support from sports institutions, we hope we can have a women’s soccer team”

“Soccer is a relief … There is nothing else to do in the city. I look forward to training sessions,” said the schoolgirl.

The families’ modest monthly contributions of between 5,000 and 10,000 dinars (three to seven dollars) are used to rent the court on a church site.

For other expenses, the four founders of the local families contribute money from their pockets.

Hala Thomas, who helped launch the academy, recently traveled to Baghdad to meet with government officials in search of funding.

He came out with promises, but nothing concrete.

“We don’t have money to buy more balls, suits or whatever we need to train,” said the 55-year-old, who chose to stay in her city instead of going with her children to the Netherlands.

“Despite the lack of support from sports institutions, we hope that we can have a women’s soccer team,” she added.

During the three years that it ruled almost a third of Iraq, ISIS subjected hundreds of thousands of women to its severe interpretation of Islam, using beatings and executions as punishment.

“Soccer is a breath of fresh air for any community. We needed something that would bring stability to our daily lives and that would be tangible.”

In and around Mosul, jihadists raped, kidnapped and enslaved thousands of women and teenagers.

The arrival of ISIS in 2014 caused tens of thousands of Christians to flee the northern province of Nineveh, some to neighboring Iraqi Kurdistan and others into exile.

Along the plains of Nineveh, churches and monasteries destroyed by the jihadists have been restored.

But the rebuilding challenges are enormous in the devastated province.

“Soccer is a breath of fresh air for any community,” said community leader Bassem Metti.

“We needed something that would bring stability to our daily life and that would be tangible,” he added.