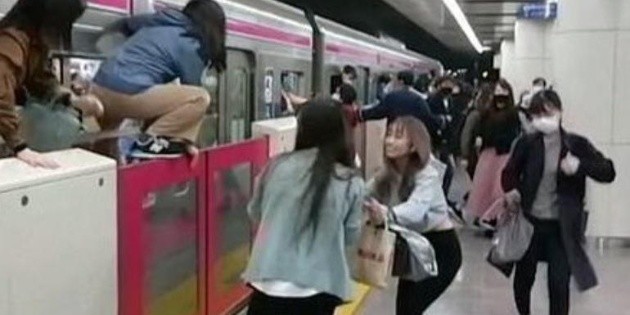 Suspect in a dagger attack on 17 people and a fire on a Tokyo train expressed his admiration for the Joker, Batman’s enemy, the Japanese press reported.

This Monday, the government called the attack “heinous and brutal”.

Police said they arrested a 24-year-old man for the assassination attempt on Sunday night, for which 18 people had to be hospitalized.

The media released videos of the police officers surrounding a man in a purple suit, bright green shirt and tie, similar to the Batman villain.

The incident generated panic and chaos in Japan, where violent crimes are rare.

Television showed terrified passengers running down the train as the car filled with smoke.

“With a knife the man stabbed the right side of the chest of a male passenger in his 70s who was on the train, but he did not achieve his goal (kill him),” a Tokyo police spokesman told AFP.

“He told the police that he wanted to be sentenced to death for killing someone.”

The attacked man was in critical condition, according to the press.

The attacker told police he admired the Joker, the Kyodo News agency and the Sankei Shimbun newspaper reported.

Batman’s archenemy is considered one of the most recognized psychopaths in comic book history, and a 2019 film about the Joker drew criticism for portraying the murderous character as a hero.

Before Sunday’s attack, the suspect walked through the Shibuya district of Tokyo, which was packed with people in Halloween costumes, according to Sankei Shimbun.

He said he put on the Joker suit especially for the attack.

A passenger on the train said the man carried out the attack without showing any emotion.

“He was carrying a knife and began to pour liquid. He was committing this act without showing emotion, mechanically. I think that scared everyone,” said the passenger.
jb