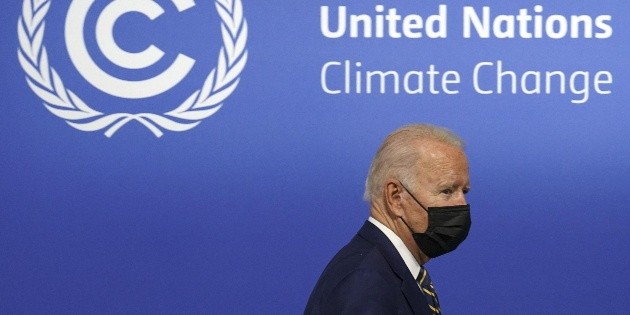 The president of the United States, Joe Biden, called on Monday that the COP26 climate summit in Glasgow (United Kingdom) be “the starting point of a decade of ambition and innovation” to combat the “existential threat” of climate change.

“This is the decade that will determine the next generations. It is the decisive decade in which we have the opportunity to show ourselves that we can maintain the goal of (limit warming to) 1.5 degrees“, he said in his speech before the conference.

Biden stressed that climate change “is not hypothetical” but already affects the lives of many people every day, including in his own country, in the form of wildfires, floods or droughts.

“None of us can escape the worst of what is to come if we fail to seize this moment.”

After reeling off the commitments made by his government in recent months, he announced that throughout the summit the United States will launch new initiatives, in fields such as agriculture, fossil fuels or the fight against deforestation.

For Biden, the recent spike in energy prices only demonstrates the need to act and advance the development of renewables.

He also wanted to present as an “incredible opportunity” for all countries the evolution towards a green economy, something that is “a moral imperative, but also an economic imperative” thanks to the creation of new jobs in different sectors.

Biden urged rich countries to increase their financial support to developing countries: “Those responsible for deforestation have a huge responsibility towards them.”

“There is no longer time to lag behind or fight each other” in the face of the “existential threat” posed by the climate crisis, “he added.

“Let’s make this the moment when we respond to the call of history,” added the US president, who will remain in Glasgow for two days after having participated last weekend in the G20 summit in Rome.