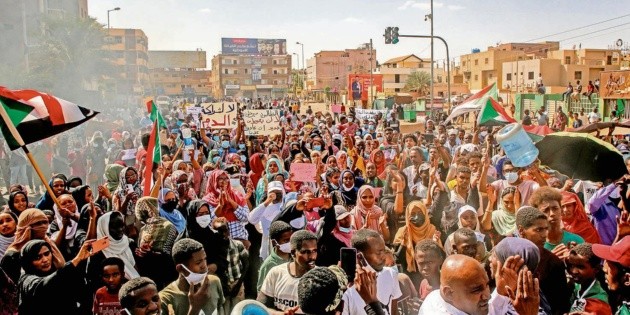 Hundreds of thousands of people marched through the streets of Khartoum yesterday to protest against the coup perpetrated on the 25th by the Sudanese military leader, Abdelfatah al Burhan, in a day that has resulted in three deaths and more than a hundred injured, despite international pressure to avoid violence.

A leader of the central committee of the opposition Force for Freedom and Change, Haider al Taghi, said that the call has been “a complete success and hundreds of thousands of people took to the streets to express their rejection of the coup d’état and with a clear message that there is no place for the military to rule ”.

The demands of this great demonstration have been clear since the riot and opponents ask that General Al Burhan reinstate the deposed prime minister, Abdullah Hamdok.

“Yes Al Burhan does not respond to these demands, we will increase civil disobedience and the political strike ”, said Al Taghi, who stressed that “today’s demonstration is the beginning of resistance to Al Burhan’s measures.”

Al Burhan dissolved the transitional bodies on the 25th and declared a state of emergency in the country after a month of tensions between the military establishment and the civilian components of the Government due to an alleged coup attempt last month, which also led to the arrest of Hamdok, although he was released the next day and continues in his residence without leaving.