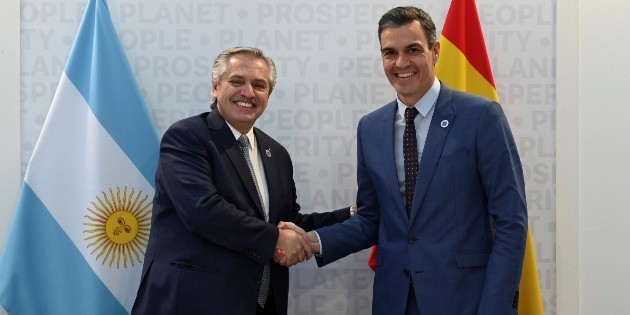 The leaders of the G20 will make today, Sunday, predictably an appeal to the International Monetary Fund (IMF) to to review your policy flight attendants on loan interest rates, an issue that Argentina defends, that negotiates the payment of a debt of more than 46 billion euros with the agency.

“The communiqué (final to be signed by the leaders) bears the mention of flight attendants, which is important for Argentina. Take the position of the G20 Finance meeting ”in Venice, Argentine Foreign Minister Santiago Cafiero said today at a meeting with the media in Rome, where the leaders’ summit is being held and attended by the country’s president. , Alberto Fernández, and the Minister of Economy, Martín Guzmán.

Fernández and Guzmán met today with the managing director of the IMF, Kirstalina Georgieva, for 90 minutes at the Argentine Embassy in Rome, but Cafiero did not give details of the content of the talks.

He limited himself to stating that Leaders such as the President of the Spanish Government, Pedro Sánchez, have shown their support for Argentina in the negotiations with the IMF.

Cafiero pointed out that Fernández had meetings today with the president of France, Emmanuel Macron; with the German Chancellor, Angela Merkel, and the candidate to succeed her, Olaf Scholz, as well as with Sánchez, and in them he took the opportunity to “reaffirm Argentina’s relationship with Europe” and emphasize the need for the Latin American country to reach the best agreement with the IMF “so that the recovery does not stop.”

Fernández highlighted “how Argentina is growing, which has been increasing exports for ten months, including September,” and how the debt “cannot be an anchor for its recovery.” The Argentine president spoke in today’s first session, dedicated to the global economy and health.