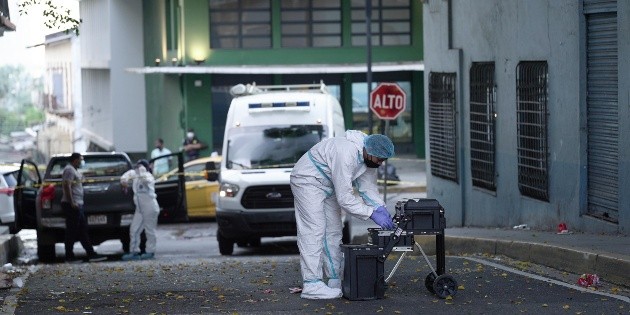 A shooting yesterday morning left at least five dead and six people injured in a nightclub in a popular neighborhood located in the historic center of the Panamanian capital, in a fact that the authorities attributed to a gang confrontation.

It is the most serious incident recorded in a place of entertainment of which there are reports in the Central American country. The scene of the events is located in a well-traveled historical area and also known for being a red area, which is increasingly reactivating its night-time activities as restrictions are lifted due to the coronavirus pandemic.

The police chief of the western area of ​​the capital, Ricaurte De La Espada, told the press that They arrested two men with a firearm suspected of the shooting. “The fact is due to a war between gangs,” he said.

While the gang problem in Panama is not as strong as in other Central American nations, such as Honduras and El Salvador, Gangs have been operating for a long time in popular and marginal neighborhoods that, according to the authorities, fight for their territory and are involved in drug trafficking. Many of the homicides, according to security officials, are due to revenge for so-called robberies or drug “knock-offs”.

In the past, gang leaders lived and operated within the San Felipe neighborhood, where the so-called Casco Antiguo or historical site is located, the capital’s greatest tourist attraction and adjacent to Santa Ana, the place of the shooting.

The homicide prosecutor Rafael Baloyes said earlier that at the scene of the shooting there were five dead, four were initially taken and the other, the alleged attacker, was removed hours after the entertainment venue, whose security is in charge of private agents.

He added that according to preliminary investigations, an armed man entered the nightclub and fired at a particular group, which responded to the attack with firearms.