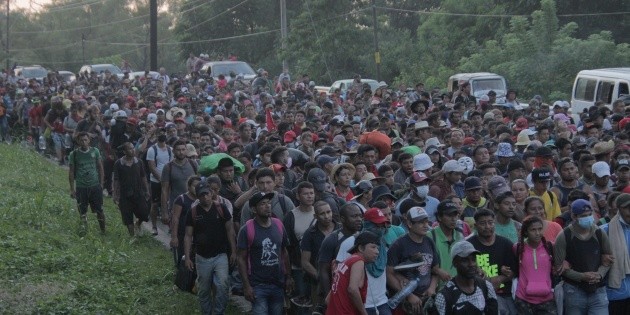 The administration of President Joe Biden launched a second attempt on Friday to end a Donald Trump-era program that forces asylum seekers to wait in Mexico for their hearings before US immigration courts.

The Secretary of National Security, Alejandro Mayorkas, said that “Staying in Mexico” likely contributed to a decline in illegal crossings in 2019, but with “substantial and unjustified human costs” for asylum seekers exposed to violence while waiting in Mexico.

The announcement came more than two months after a federal judge in Texas ordered the program to resume “in good faith,” while leaving a door open for the government to try again to justify its end.

The US government said a few weeks ago that it expected to resume the program, officially called “Migrant Protection Protocols,” by mid-November, subject to approval by the Mexican government.

Mexico wants the cases to be concluded in approximately six months and to improve asylum seekers’ access to legal advice and information on their case.

Some of the administration’s most recognized pro-immigration allies pointed out that the time it took Mayorkas to deliver his opinion on Friday demonstrated a lack of urgency, something US officials deny.

Many U.S.-based legal advisory groups that have represented asylum seekers in Mexico who were subjected to the program say they will no longer accept such cases, raising questions about how the United States will be able to satisfy Mexico’s insistence that they have better access. to counseling.

Government officials say they believe there are enough more lawyers to represent asylum seekers who are returned to Mexico.

About 70,000 asylum seekers have been subjected to the program, which Trump introduced in January 2019 and Biden suspended on his first day in office. Mayorkas ended the rule in June after an internal review showed “mixed effectiveness.”

Illegal crossings fell dramatically after Mexico, facing Trump’s threat of imposing high tariffs, agreed to the expansion of the policy in 2019. Asylum seekers were victims of violent acts while waiting in Mexico and faced a series of legal obstacles, such as lack of access to lawyers and information about their cases.

Mayorkas said on Friday that his second review presumed that the policy caused a significant drop in border crossings, which is the biggest argument for maintaining it. Still, he said those benefits don’t outweigh the costs in terms of relations with Mexico, resources and risks associated with exposure to violence while they wait in Mexican border cities.

“There are inherent problems with the program that no amount of resources will correct sufficiently,” he wrote. “Others cannot be solved without deviating from key government priorities and more durable solutions.”

A panel of three federal judges from the 5th Circuit Court of Appeals will hear arguments Tuesday in a lawsuit filed by the states of Texas and Missouri.

The government is expected to ask that that case be returned to federal judge Matthew Kacsmaryk, in Amarillo, Texas, who in August ordered that the policy be reinstated. The government is rebuilding camps in the Texas border cities of Laredo and Brownsville to deal with the “Remain in Mexico” cases.