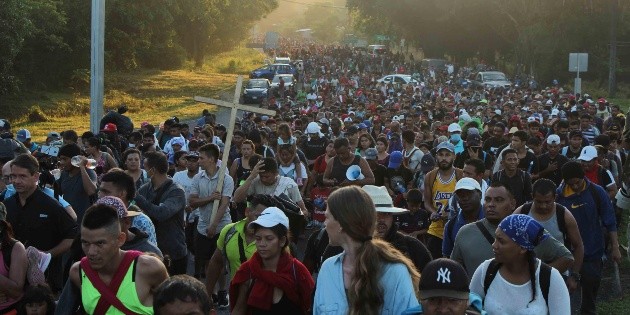 The Inter-American Commission on Human Rights (IACHR) again expressed its concern on Thursday about the situation of migrants who have been expelled from the United States under a rule that seeks prevent the spread of the pandemic and remain in Mexico or have been returned to their countries.

IACHR Commissioner Edgar Stuardo Ralón declared himself “quite concerned” by the “dramatic situation” exposed by the civil society organizations that took part today in a public hearing organized by this Washington-based body.

Ralón pointed out that, according to these organizations, the migration panorama has been worsening since 2017 and represents a “situation of terror for many people”.

Nicole Elizabeth Ramos, from the Tijuana-based organization Al Otro Lado, recounted the cases of people who have come to the border in search of asylum and have come across Title 42, which authorizes the expedited expulsion of those who enter the irregular to the US to prevent the spread of COVID-19.

Ramos pointed out that between mid-June and mid-August of this year, almost 83% of all people who sought asylum suffered from “attacks or threats at the border”And he complained that the US Government does it knowing that it sends those people to die when it expels them.

In his turn, Yael Schacher, of the organization Refugees International, said that from March 2020 until last September 1.163 billion people were expelled from the United States under Title 42.

He pointed out that since the end of September 3,217 immigrants affected by this rule ended up having an interview at the US asylum offices, of which only 272 passed that process.

For her part, the Deputy Under Secretary of the Office of Population, Refugees and Migration of the Department of State, Marta Youth, highlighted that the Government of President Joe Biden works on a strategy to address the root causes of migration, rebuilding the asylum system and expanding legal avenues for “safe, orderly and humane” immigration.

Government representatives stated that they are investigating the actions of US Border Patrol agents for the images that went viral in September of them riding horses, harassing Haitian migrants.

In one case, an agent is apparently seen beating a migrant with what appears to be a whip.

With this meeting, entitled “Situation of human rights of migrants and refugees in the United States”, The 181st regular session of the IACHR that began last Thursday was brought to an end.