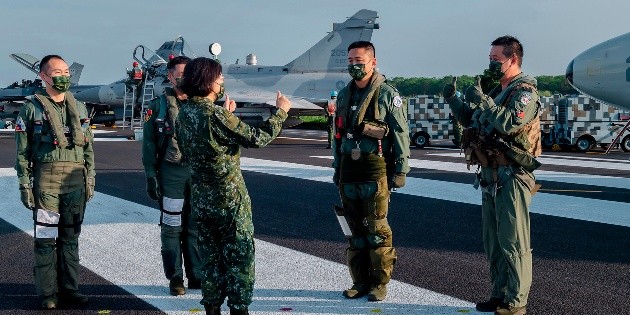 The president of Taiwan confirmed the presence of a small number of US troops to help train the island’s army, prompting a strong reaction from China.

“We firmly oppose any form of official exchanges and military contacts between the United States and Taiwan,” a spokesman for Chinese diplomacy, Wang Wenbin, said on Thursday.

In an editorial, the Chinese nationalist daily Global Times affirmed on his side that “with the presence of American soldiers in Taiwan, a red line was crossed. “

In an interview with the US network CNN recorded on Tuesday but broadcast on Wednesday, Taiwanese President Tsai Ing-wen described the island as a “beacon” of democracy in the region that faces its giant neighbor, whose threat grows ” every day”.

Earlier this month, a Pentagon source confirmed for the first time the presence of US troops in Taiwan, that Beijing considered an integral part of its territory.

But until now, no Taiwanese leader has publicly admitted such a presence since the last US garrison left the island in 1979 after China’s diplomatic recognition of the communist regime.

Asked how many US troops were in Taiwan, Tsai replied “not as many as people think.” “We have extensive cooperation with the United States to increase our defense capabilities,” he added.

On whether she was relying on US help in the event of an attack by China, the Taiwanese president replied: “I have faith.”

In a speech to deputies on Thursday, Taiwanese Defense Minister Chiu Kuo-Cheng elaborated on the issue. “We have personal exchanges and they are here for military cooperation. But this is different, by my definition, from having troops stationed +,” he said.

The United States and China have recently clashed over the fate of the island of 23 million people, which has its own government, currency and army, but which Beijing considers one of its provinces awaiting reunification.

Earlier on Wednesday, US President Joe Biden said the United States was “deeply concerned about China’s coercive and aggressive actions … in the Taiwan Strait.”

Tensions have risen as Chinese air raids have increased near this country.
Such actions “threaten regional peace and stability,” the US president added, according to a recording of his remarks.

The head of American diplomacy, Antony flash, also provoked the ire of Beijing in advocating Tuesday for the “meaningful engagement” of Taipei in the organs of the United Nations (UN) and on the international scene.

“The exclusion of Taiwan undermines the important work of the UN and its agencies,” he insisted, stating that the contribution of that country is necessary to address “an unprecedented number of global challenges.”

“Taiwan has no right to participate in the UN,” Beijing immediately replied, through the spokesman for the Taiwan Affairs Office, Ma Xiaoguang.

The sensitive Taiwan issue is likely to further fracture relations between the United States and China, which are at their lowest point in years. Last week, Biden seemed to want to send a new message of assertiveness to Beijing.

Asked about the possibility of a US military intervention to defend Taiwan in the event of an attack by China, President Biden answered affirmatively: “Yes, we have a commitment in that regard.”

His statement appeared to contradict the US “strategic ambiguity” stance. Under this scheme, Washington helps Taiwan to build and strengthen its defense, but without explicitly promising that it will come to its aid in case of attack.

Biden’s comments were not well received in Beijing and the US government clarified shortly after that it kept its policy under the 1979 Taiwan Relations Act “unchanged”.

China considers Taiwan, the island to which Chang Kai-shek’s nationalists defeated on the mainland by Mao Tse Tung’s communists fled in 1949, to be a province awaiting reunification, by force if necessary.

“The one-China principle is the foundation of Sino-US relations,” Chinese spokesman Wang Wenbin told reporters on Thursday. “The United States must not underestimate the strong determination of the Chinese people in defending their sovereignty and territorial integrity.”