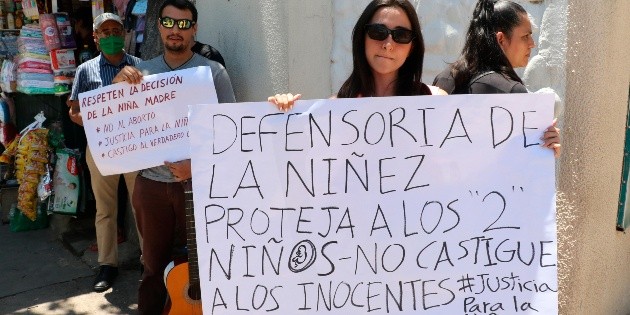 An 11-year-old Bolivian girl who became pregnant as a result of her grandfather’s rape, she will not abort and is already welcomed in a center of the Catholic Church.

The girl, originally from the municipality of Yapacaní and whose case has caused an impact not only in Bolivia, but internationally, was admitted to the Maternity area of ​​the Percy Boland Hospital, in Santa Cruz. At first, she expressed her desire to terminate the pregnancy. “I don’t want to be a mother,” she said.

In Bolivia abortion is allowed when the pregnancy is the result of rape, the product of an incest relationship or when the mother’s life is in danger; Nevertheless, After religious spoke with the girl’s mother, they convinced her to give up her idea.

The minor already left the hospital and was taken to the Mother Mary Teenage Mothers Center. In a statement, the Catholic Church said that “the only solution is to save, care for and lovingly support both lives” and that the center where the girl is located will ensure “material, medical, psychological and spiritual support for the maternity and post-maternity time “.

Bolivian media, citing as a source one of the police officers who was in charge of the case, the Church would have offered to pay a monthly amount to the family – undisclosed – to prevent it from interrupting the pregnancy.

The minor was raped by her 61-year-old grandmother who is in custody. The aggressor took advantage of the fact that he was in charge of both the girl and her 15-year-old sister, since their mother worked as a cook in La Paz.

Local media reported that the older sister was also a victim of sexual abuse, but by her father, who is also in custody.

The case has generated commotion and even the UN took a position this Wednesday. In a statement, the United Nations System in Bolivia stressed that “subjecting a girl to a forced pregnancy is classified as torture.”

In Yapacaní, women demonstrated, some in favor and others against the termination of the minor’s pregnancy. “Girls, not mothers,” cried the former. “Save both lives,” replied the others.