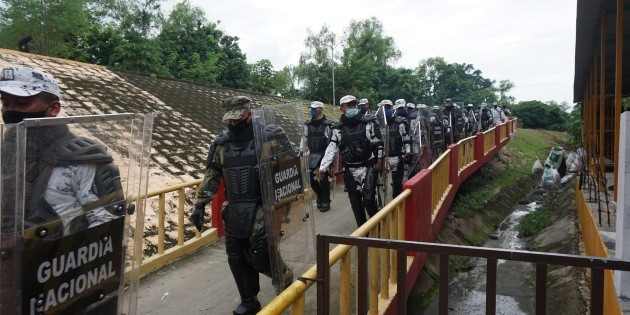 More than 2,000 migrants, mostly Central American, continued on Monday to walk north through southern Mexico towards the town of Huixtla, in Chiapas, in whose outskirts there was a deployment of security forces that suggested an eventual operation to try to stop their march.

Around a hundred members of the National Guard, the army and the National Migration Institute and at least one bus were waiting for the group on the road a few kilometers before Huixtla, an area where the previous groups that left the city of Tapachula, on the border with Guatemala, have been dissolved in recent months.

Authorities promise adherence to the law

In August, some of these operations were denounced by international organizations for the excessive use of force, but on Monday the Mexican government assured that human rights would be respected.

“It is going to act with prudence, respecting the rights of the people “and in accordance with the law, guaranteed the chancellor Marcelo Ebrard when asked about it at a press conference and after lamenting that migrants are being encouraged to walk to the United States through deception.

This latest group of migrants, the largest in months, began walking on Saturday and was made up mainly of migrants from Honduras and El Salvador, many accompanied by young children. Very early on Monday they left from the town of Huehuetán, where they had spent the night.

Unlike previous caravans, the one that left Tapachula on Saturday did not include as many Haitian migrants, thousands of whom reached the southern border of the United States, near Del Rio, Texas, in September. Thousands were returned to Haiti, others to southern Mexico, and there were also many who were released into US territory.

Migrants request refuge and there is no response

“We are not hurting anyone,” said Maryin Juárez, a Nicaraguan university student who travels with her uncle and cousin and hopes to once again avoid arrests as she did over the weekend, when they had to run to avoid being detained in a catch and even lost his shoes.

Juárez, like tens of thousands of migrants from Honduras, El Salvador and Haiti have been waiting in Tapachula for the Mexican authorities to answer them about their refugee applications, but they grew weary of the delays in the process.

The young Nicaraguan, who said she was fleeing the repression of the Daniel Ortega government against the students, arrived in that city two months ago and the first appointments for the shelter were given for January and February 2022, so he decided to start walking. “Our little money went to us there,” he lamented.

Collectives in defense of migrants

Coinciding with the advance of the carava, several civil groups launched a campaign with the slogan # ProtectionNoContention, calling on the Mexican State “to end the repression, containment and deportation of people in need of protection and guarantee their right to request asylum or regularize their immigration status, in accordance with national and international legislation. “

Mexico requires that migrants requesting a humanitarian or asylum visa remain in Chiapas so that their cases can be processed.

At the first checkpoint the group encountered on Saturday, state police tried to arrest them but there were only minor altercations and a small child suffered a minor head injury.. Despite this they continued their journey.

“We don’t want problems with anyone,” said Anthony Beltrández, a Cuban who left his country in 2018 to go to Uruguay and who had been waiting in Tapachula for a month and a half for documents that would allow him to reach the southern border of the United States. “We want to do everything peacefully.”

In January, a larger caravan tried to leave Honduras but the Guatemalan authorities prevented it from moving forward. These caravans are similar, although not nearly as large, to those that crossed Mexico in 2018 and 2019.