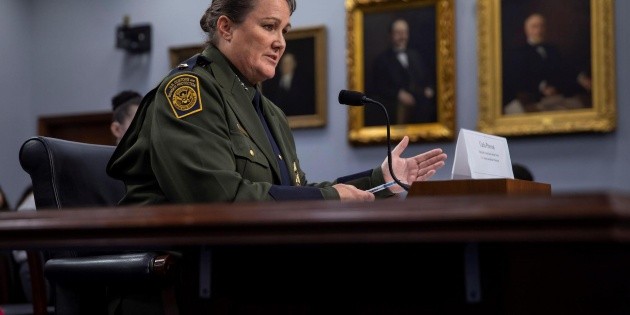 Most of the agents of the US Border Patrol that insulted immigrants and Hispanic legislators in secret facebook groups They were hardly subject to disciplinary measures, according to a report by a lower house committee published Monday.

According to that source, Customs and Border Protection (CBP), which oversees the Border Patrol, investigated 135 employees for “inappropriate activity on social media” and determined that 60 officers should be reprimanded.

In addition, the CBP disciplinary committee – which acted independently – determined that 24 officers were to be fired, but finally only two were forced to leave their post.

Among the 24 who should have been fired is, for example, an agent who posted on Facebook a false and “sexually explicit” image of a Hispanic congresswoman and who ended up being suspended for 60 days, although he received his salary retroactively.

The CBP disciplinary committee also recommended the removal of an agent who shared an internal Border Patrol video on Facebook showing an immigrant falling off a cliff and dying. Instead of firing that agent, CBP suspended him from his post for 30 days.

The report published this Monday by the Committee on Oversight and Reform of the Lower House, with a Democratic majority, concludes that there were “significant deficiencies” in the way CBP handled the investigation and considers that the disciplinary process was “inconsistent”.

In addition to the two dismissals, 43 officers were temporarily suspended without pay, 12 received warning letters and another three were subjected to other types of disciplinary measures, according to the report.

Ten of the officers retired before CBP’s internal investigation ended. Among them is an agent with a long history of violations who mocked a migrant father and son who had drowned trying to reach the United States and who, despite his comments, received his full pension.

Regardless of the penalties, Most of the agents who were investigated continue to work with undocumented immigrants, including minors..

The Lower House committee’s investigation began in 2019 after ProPublica and other media outlets revealed that thousands of border agents had used Facebook groups to make racist, sexist and violent comments against immigrants and lawmakers.

The committee tried for more than a year to access CBP’s internal investigation, but the Government of Donald Trump (2017-2021) blocked access to these documents.

Finally, in February, already under the government of Joe Biden, the committee was able to access the data on the investigation.

The Facebook group best known to agents had up to 9,500 followers and was known as “I’m 10-15”, which in Border Patrol jargon means “foreigners in custody.”

According to the report of the Lower House committee, CBP leaders knew of the existence of this group and its violent content at least since August 2016, at the end of the Barack Obama administration (2017-2021), but they took ” minimum actions “to end those actions.

Members of that group include the former head of CBP with Trump, Carla Provost, who had to testify before Congress for that incident and claimed that she only belonged to that digital community to be in contact with employees.

For its part, Facebook did not facilitate CBP’s internal investigation.

Specific, The social network did not allow independent CBP investigators to examine the content of that secret groupTherefore, the investigations of the disciplinary committee had to be based on information from the media, the report explains.