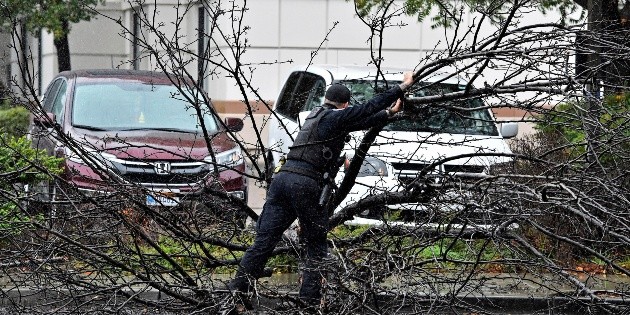 A strong storm headed into southern California on Monday after flooding roads, knocking down trees and causing landslides in areas previously ravaged by wildfires across the north of the state.

Torrential rains and strong winds accompanied the arrival of an atmospheric river, a broad band of moisture in the Pacific, in the drought-stricken state over the weekend.

The rain broke records and heavy snowfall hit the highlands of the Sierra Nevada.

Electrical wiring poles were toppled and tens of thousands of people in North Bay were without power.

“It has been a memorable 24 hour period for the Bay Area as the aforementioned atmospheric river crossed the region”local meteorological authorities said.

“We have literally gone from fire and drought conditions to flooding in a single cycle of storms.”

The weather service called the total preliminary precipitation “shocking,” including 28 centimeters (11 inches) of rainfall at the base of Mount Tamalpais in Marin County and 10 centimeters (four inches) in downtown San Francisco.

“It seems that yesterday was the fourth rainiest day in history for downtown San Francisco, for which there are records from the Gold Rush years.”, stressed the meteorological service.

In California’s Colusa and Yolo counties, state highways 16 and 20 were closed for several miles due to landslides, the state Department of Transportation reported.