As you hopefully already know, Individual Lightning Lane attractions are not included in the Genie+ service. That MaxPass-like service costs $16 per person per day, and includes everything except the 2 rides per park that are ILL. (That’s an unfortunate acronym, but perhaps it’s meant to evoke how you’ll feel after dropping ~$28 for your family to skip a 5 minute wait for Expedition Everest!)

Before that, a quick housekeeping note. When Walt Disney World first announced this, it used a la carte and individual Lightning Lanes interchangeably when referring to this, leading us to coin the “Magic Carpet Access” term to distinguish this from the physical Lightning Lanes in the parks. Our hope was that Disney would realize using Lightning Lanes to refer to two different things would be confusing, and they’d rebrand this as something without Lightning Lane in the name.

That didn’t happen. Instead, they capitalized individual (sometimes) and now refer to this a la carte offering as Individual Lightning Lanes. Definitely not an ideal solution, but neither is us continuing to use Magic Carpet Access. Since that’s our own term, it’s likely to confuse new readers–so we’re going to drop that from the site going forward. 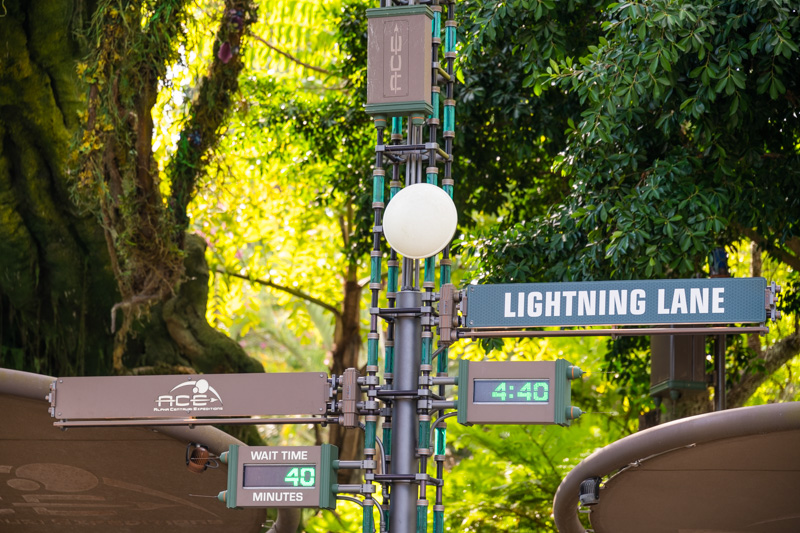 Next, let’s take a look at Individual Lightning Lane pricing. Walt Disney World previously announced that prices will vary depending on the attraction and day of visit. Think of it like Express Lanes on highways–dynamic pricing that increases with demand.

It would thus be a bit disingenuous to say that prices have already “increased” on Individual Lightning Lanes. Rather, the service launched on a weekday when crowds were lower, and prices went up on the weekend when crowds were higher. If Genie launched on a weekend when prices were higher, we wouldn’t say they “decreased” once the weekdays rolled around. They’re going to be up and down with demand.

Here’s a look at high and low price points we’ve seen so far: 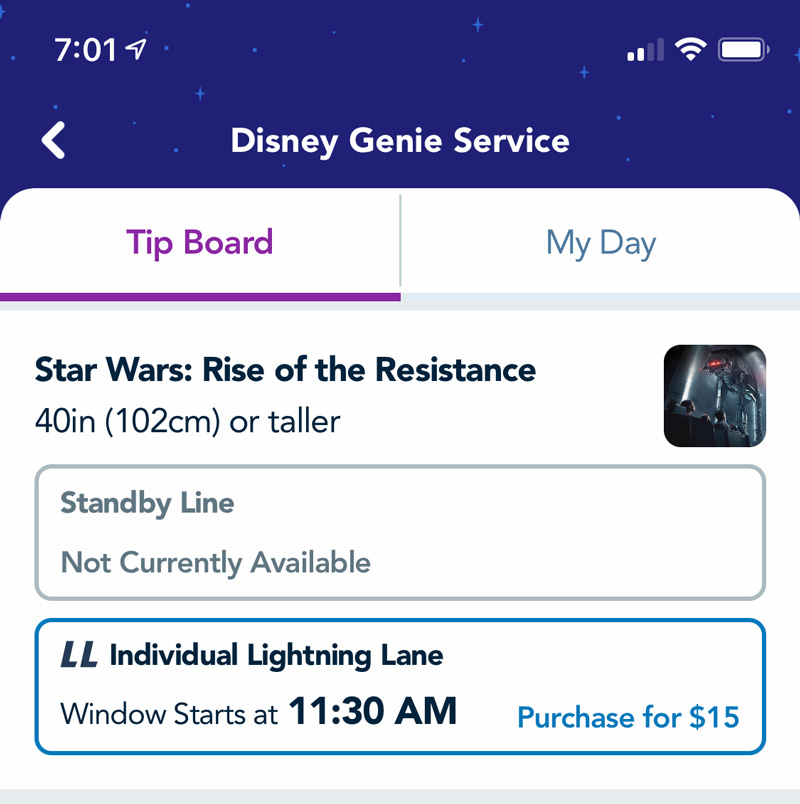 It’s almost certain that we haven’t seen Individual Lightning Lane peak prices yet. For one thing, October isn’t nearly as busy as November and December, especially the week leading up to Thanksgiving, Christmas, and New Year’s Eve.

For another thing, current demand on some of these already suggests that the prices could likely go up significantly. Conversely, others might already be priced too high. 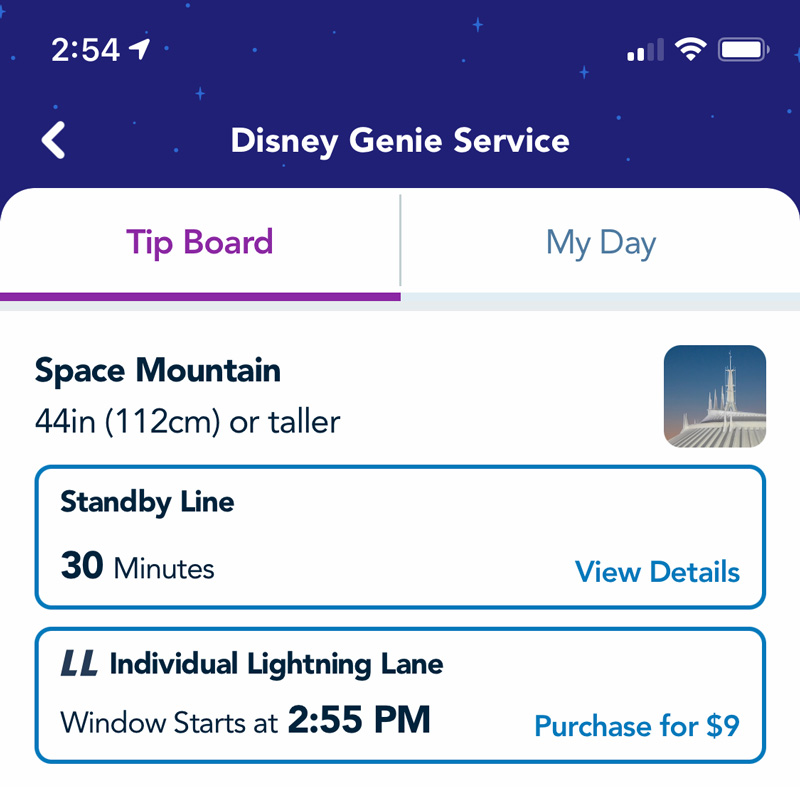 That brings us to our next topic: Individual Lightning Lane availability or lack thereof–what’s selling out and what’s readily available.

In Magic Kingdom, Seven Dwarfs Mine Train has sold out on several days, but has always lasted late into the day. By contrast, Space Mountain has yet to sell out. It also always has immediate times available, and low standby wait times as a result of the low demand. 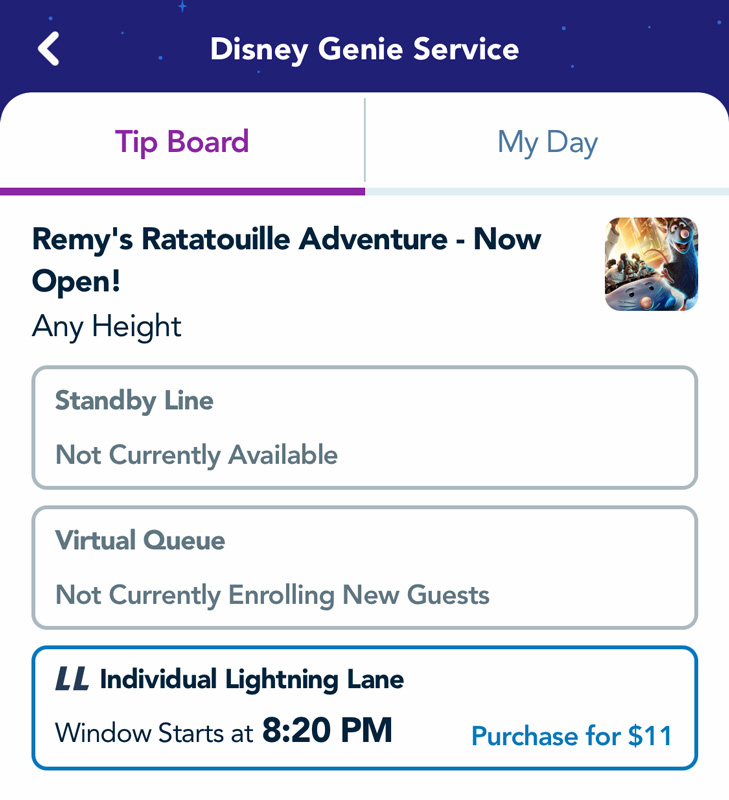 Over at Epcot, Remy’s Ratatouille Adventure is doing pretty well, selling out most afternoons but rarely–if ever–before the afternoon virtual queue entry time. Since there’s no standby here, many guests buy after being denied both attempts at scoring boarding passes.

Conversely, Frozen Ever After usually has availability in the near future and is seldom unavailable. This is despite long standby wait times, which suggest to us that it’s likely selling reasonably well. For now, this one is hitting the sweet spot. 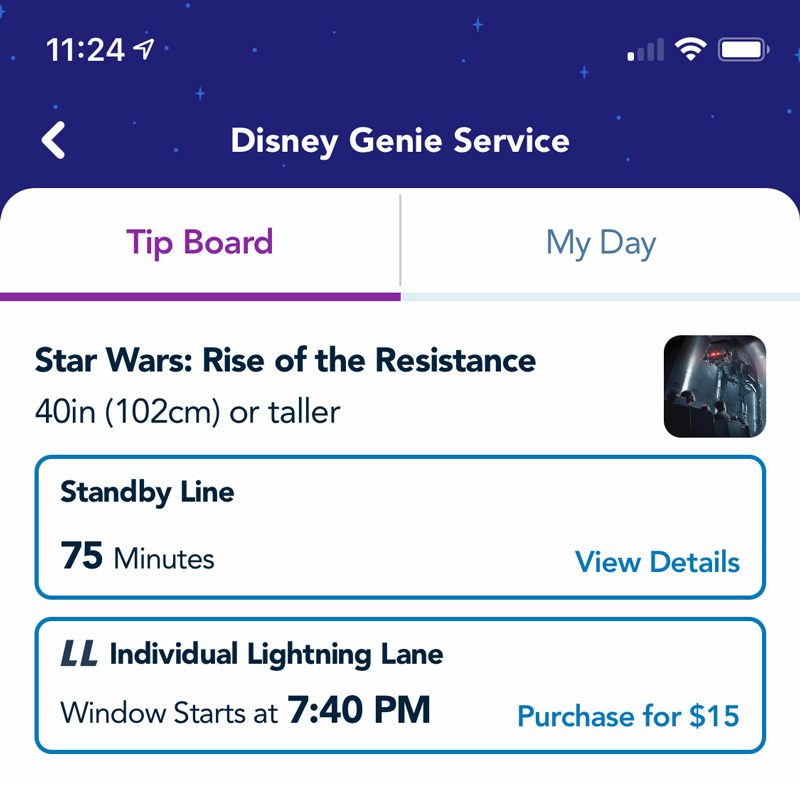 Disney’s Hollywood Studios is home to the unequivocal best-seller: Star Wars Rise of the Resistance. This is the only Individual Lightning Lane attraction that sometimes sells out before 9 am, which is when off-site guests are eligible to purchase. We’ve seen it last until almost noon once, but usually, it’s gone before 10 am.

Mickey & Minnie’s Runaway Railway is a similar story to Frozen Ever After. It’s typically available for quick turnaround times and has never sold out, but seems to be doing fine from Disney’s perspective. 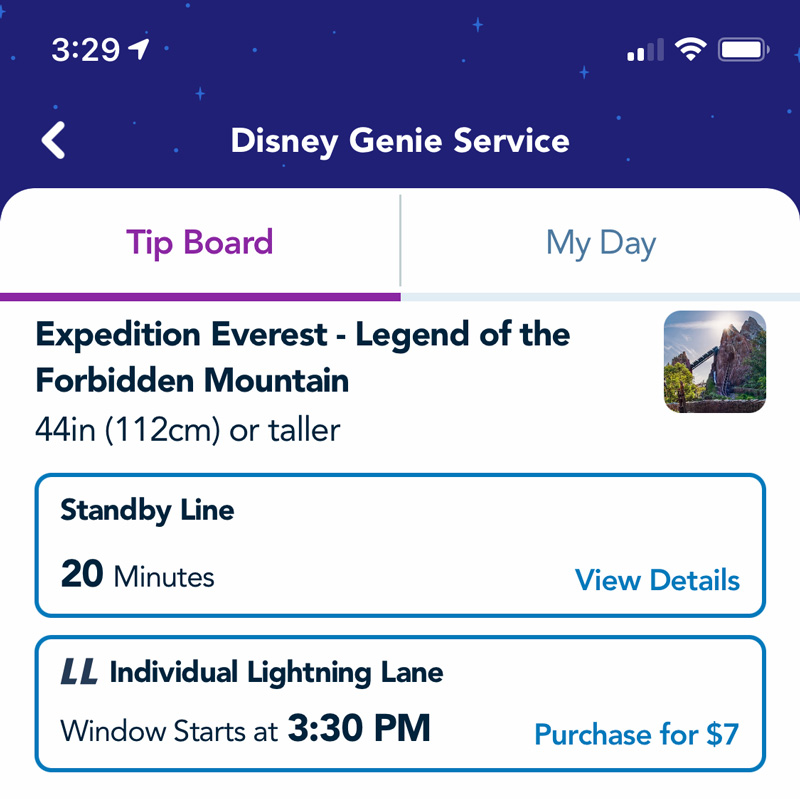 Animal Kingdom is where you’ll find one of Walt Disney World’s most popular attractions: Avatar Flight of Passage. This has sold pretty well, often being gone by early afternoon while posting hour-plus or even triple digit standby wait times.

Conversely, there’s Expedition Everest. There have been some days and times when you could do the attraction faster via standby–literally. The time it takes to purchase an Individual Lightning Lane plus the delay between booking and using is longer than the walk-on wait times for Expedition Everest. 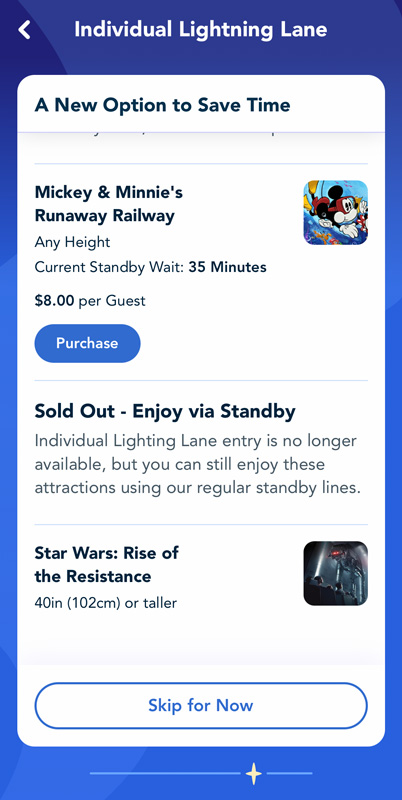 Given all of the above, our expectation is that Star Wars: Rise of the Resistance sees a price increase–or several–between now and the end of 2022. If I were visiting this holiday season and planned on buying Individual Lightning Lane access on this Galaxy’s Edge headliner, I’d budget $25 per person for it. That’s not to say it’ll increase to that amount, but I would not bet against it.

There’s no shortage of demand for Star Wars: Rise of the Resistance Individual Lightning Lanes at present, and that’ll only increase along with crowds and as standby wait times likewise go up. Walt Disney World could potentially triple the price on that to $45 per person and still sell more of those Individual Lightning Lanes than they do for Expedition Everest or Space Mountain. 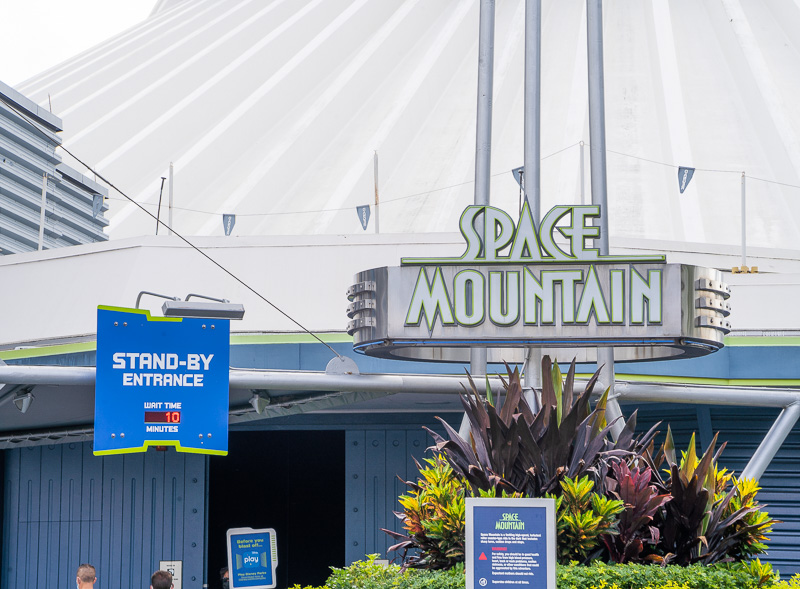 Speaking of which, those two mountains are the most obvious candidates for price decreases or even relegation to the more inclusive Genie+ service. Expedition Everest could be replaced with Na’vi River Journey, or nothing at all.

In Magic Kingdom, a replacement for Space Mountain is more challenging. Peter Pan’s Flight, perhaps? The obvious choice is TRON Lightcycle Run, but that’s still a year or two away from opening. Disney might just stick with Space Mountain for now, content with slower sales.

Next, here’s how to book Individual Lightning Lanes… 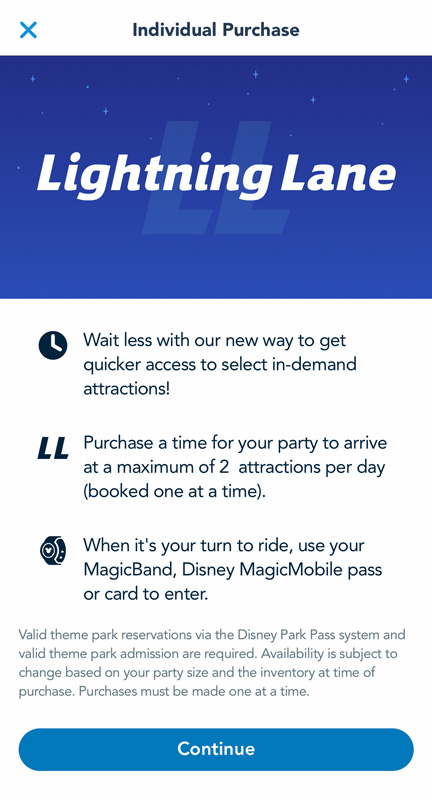 There are a few different ways to make an initial purchase of Individual Lightning Lanes.

It’s entirely possible you’ll be prompted while browsing My Disney Experience or setting up the free Genie service, in which case you’d see something like the above.

You can also navigate to the Tip Board via the + button at the middle bottom of My Disney Experience or the hamburger button on the bottom right.

From there, you’ll see something similar to the above screen. Click the Individual Lightning Lane box for the attraction to which you’d like to buy line-skipping access.

From there, you’ll either see the screen above or one to select your party. This is pretty self-explanatory; you select the start time of available one-hour return windows.

Be sure to check your existing plans (tap the arrow next to “Plans During This Time” for a dropdown) to avoid significant overlap between Advance Dining Reservations, Genie+ selections, and other plans. My Disney Experience will not prevent you from booking conflicting plans–it’s up to you to make sure you’re not double-booked.

It’s also possible you’ll first be directed to this screen, where you can select which members of your party for whom you’d like to purchase Individual Lightning Lane access. This means that you do not need to purchase ILL for anyone who the ride might make physically ill, kids who are too short to ride, etc.

If you don’t see the above screen first, you can get to this point by tapping the “Edit” button to the right of your party on the time slot selection screen.

After confirming your party and selecting a time, you’re sent to a screen to review the details before completing the purchase.

If anything is inaccurate or you’d like to change it, tap the back arrow on the top left corner of the screen.

Otherwise, it’s on to enter or confirm your contact details, payment info, and agree to Disney’s terms & conditions before tapping purchase. Notably, Individual Lightning Lane prices do not include tax–just like the Genie+ service–which feels like nickel & diming on top of nickel & diming.

On a more humorous note, there’s a caveat above the terms & conditions that this Individual Lightning Lane can only be redeemed at Walt Disney World–near Orlando, Florida. If someone can’t distinguish between Disneyland in Anaheim, California and Walt Disney World, they are seriously going to be lost when it comes to the convoluted Genie system! 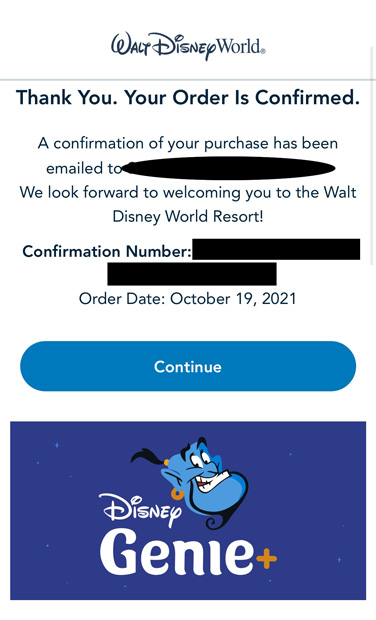 From there, you’ll receive a receipt with a lengthy confirmation number and order details that should look similar to the above. I say “should” because I’ve never actually bought Individual Lightning Lane access and have no intentions of doing so.

No offense to those who plan on buying these–to each their own–but it’s simply a line we’re not willing to cross, so to speak. While we are already fans of Genie+, that’s bundled access for multiple attractions that makes the whole day easier. This is different, as it means putting a price on a single attraction–all of which we have done many, many times over the years. 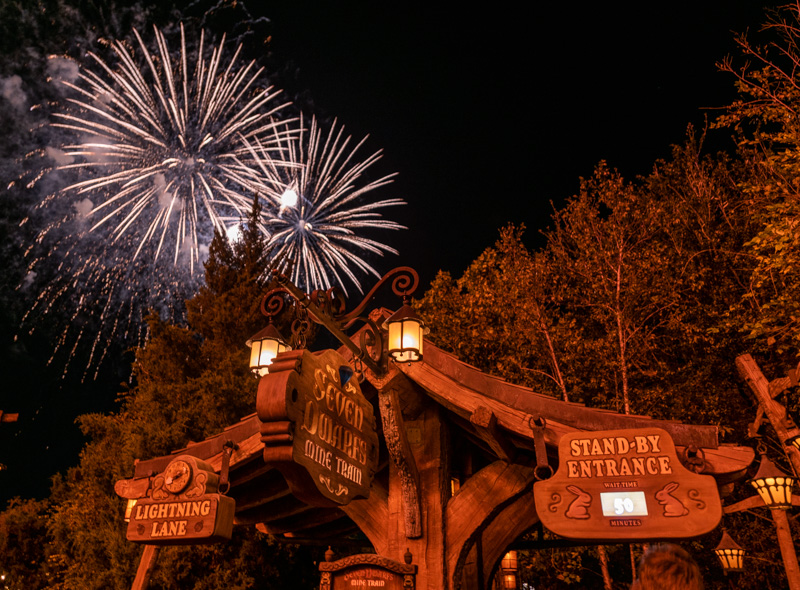 Beyond that, us buying Individual Lightning Lane access is not necessary “for the sake of research,” whereas testing and using Genie+ very much is.

On top of that, since there are only 2 ILL rides per park, it’s pretty easy to rope drop one and do the other right before park closing and bypass the lines that way. If anything, thinking up, trying, and testing other savvy strategy to bypass long waits at Individual Lightning Lane attractions will be a “fun” challenge. That’s more important to us than getting to skip the lines ourselves!

What do you think of the pay-per-ride Individual Lightning Lane ride reservations? Planning on using this to skip standby lines, or do you prefer not to pay even more for an already expensive Walt Disney World vacation? Are you more likely to purchase Genie+ or Individual Lightning Lanes–or neither? Do you agree or disagree with our advice and assessment? Any questions we can help you answer? Hearing your feedback—even when you disagree with us—is both interesting to us and helpful to other readers, so please share your thoughts below in the comments!