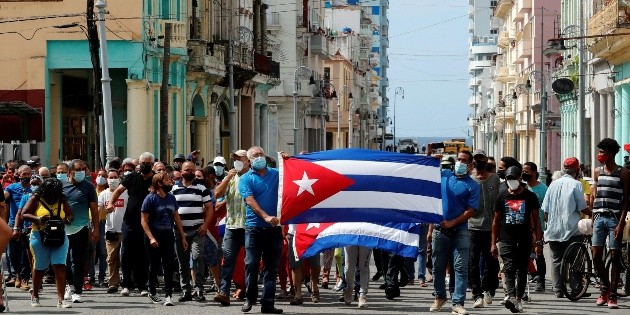 A protester accused of crimes such as contempt and public disorder was sentenced to 10 years in prison, the longest sentence imposed on a detainee related to the July 11 protests in Cuba, according to a human rights organization.

The Municipal People’s Court of San José de las Lajas, a town 35 km from Havana, imposed on Roberto Pérez Fonseca, 38, the “Joint and single penalty to serve 10 years” in prison for the crimes of contempt, attack, public disorder and instigation to commit a crime, indicates the sentence dated October 6, after his family was notified this week.

Three court judges determined Pérez Fonseca’s guilt based on statements by local police officer Jorge Luis García Montero, the only testimony recognized by the magistrates. Two defense witnesses were dismissed as “partial” and because they were a relative and a friend.

The uniformed man said that on July 11, Pérez Fonseca “He incited the rest of the people to form groups, to throw stones and bottles”, even towards a local grocery store. He was arrested on July 16 at his home.

Pérez threw a stone that fell on the officer’s wrist, “causing abrasions that did not require medical assistance,” and he threw another stone that hit a patrol “that did not show damage,” in addition to ignoring the COVID-19 confinement order. indicates the document. The sentence “is excessive and violates all guarantees of due process,” said Laritza Diversent, director of the Miami-based human rights NGO Cubalex, stating that it is the longest sentence in a case for these manifestations.

Everything “responds to a criminal policy” as a result of the July demonstrations with “severe sanctions as an exemplary effect so that the rest of society is inhibited” and that seeks to “instill fear and fear,” says Diversent.

The demonstrations on July 11 and 12 in about 50 cities shouting “Freedom” and “We are hungry” left one dead, dozens injured and 1,130 detainees, of which more than 560 are still in prison.