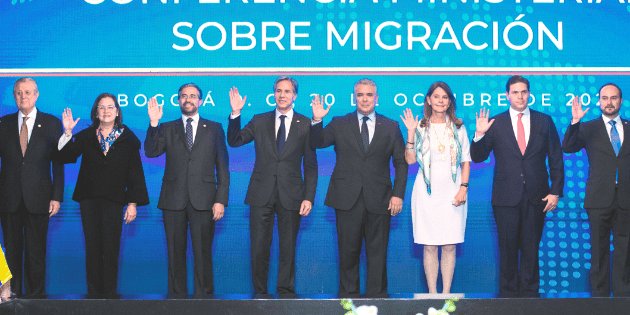 Ministers from several American countries met this Wednesday in Bogotá to addressing “the migration challenge” as a shared problem that they must solve together and with the urgency of slowing down the flow of people fleeing from countries like Haiti or Venezuela.

The Ministerial Conference on Migration was led by the Vice President and Foreign Minister of Colombia, Marta Lucía Ramírez, and attended by the Secretary of State of the United States, Antony Blinken, and ministers from countries such as Ecuador, Peru, Panama, Mexico, Guatemala, El Salvador and Dominican Republic, affected by the different crises that the hemisphere is experiencing.

Cae “Otoniel”, head of the Gulf Clan and the most wanted drug dealer in Colombia

“The migratory challenge that we face in the hemisphere is not the problem of a single country, it is a shared problem and cannot be solved by a single country, we must solve it together. This is the spirit that brings us together today and I hope this will be the foundation of the work we do together, “Blinken said at the opening of the meeting.

The secretary of state explained that the fact that migration does not flow “in a single direction or for a single reason” is something complex because it challenges the “collective capacity” of the region to respond to this challenge.

According to Ramírez, a balance must be found between “solutions that understand the situation and allow us to advance in the short term” and other long-term ones that can respond to “those systemic failures in governance, in development, the lack of opportunities, the lack of a much more effective presence of the State in the territories “.

Both Blinken and Colombian President Iván Duque agreed that “immediate specific steps” must be taken with quick effects to slow the flow and make migration “safer, orderly and humane.”

“We have to do many things immediately, such as strengthening border surveillance, for example, requiring visas and meticulously controlling entry (to countries),” said the chief of US diplomacy.

Along these lines, President Duque, whose country is the largest recipient of Venezuelan migrants with 1.8 million, made three proposals that, he believes, will help address the problem.

The first of them He explained, is that he asked the international cooperation agencies to carry out a census to find out how many migrants there are in the American countries, because “without precise information we will not have precise public policies“.

The second is that from that census decisions are made on the type of visas that will be granted to migrants, whether permanent or temporary, and for which there must be “great cooperation” between the countries that host them.

“Colombia offers all the willingness to share our own experience in the development of public policies and its own temporary protection status so that it can be known by other countries that face a similar phenomenon of Venezuelan migration because that would allow us all to coordinate”, added.

Colombia has implemented solidarity measures, such as the Temporary Protection Statute, to provide Venezuelan migrants with decent living conditions, transparent access to state institutions, and integrate them into the economy and the labor market.

Before the Conference opened, Blinken and Duque met to address issues such as drug trafficking, in which the US Secretary of State recognized that to fight against this problem, the roots of the problem must be addressed, such as inequality. or “reduce the demand in the US which is fueling all the illicit activity.”

“We are going to focus on attacking the roots of drug trafficking and other challenges such as inequity, corruption, impunity (…) and that means investing in the prevention and recovery of those who are fighting addiction,” said the leader. of American diplomacy.

In that sense, and in a speech very different from the usual one from other US officials who are more focused on the eradication of crops, Blinken advocated “investing in young people so that they do not succumb to the temptations of drugs and training judges and prosecutors as well as having laws that prevent corruption from undermining the trust of citizens. “

He also emphasized the “responsibility” and “accountability” of governments for human rights abuses and violations. both in the armed conflict and in the response to the protests that took place in Colombia between May and June of this year, for which the Police have been accused of an excessive use of force.

It will give US support for migration

US Secretary of State Antony Blinken led a ministerial meeting on migration on Wednesday during his first official visit to Colombia to seek short and long-term solutions together with the foreign ministers of the countries of the region.

At the summit, Blinken addressed one of the recurring requests from transit countries: financing. For this, he assured, the resources should be directed to the communities in the region that receive them and in the long term deal with the fundamental causes of migration, which are usually summarized in the lack of hope that life in their country will improve.

“President (Joe) Biden has committed to making the investments and our approach should help us do a better job helping those countries that are bearing the greatest burden of this problem“Blinken said.

The Secretary of State proposed to address migration with a “comprehensive approach” and immediately manage measures such as strengthening border surveillance by requiring visas. However, he did not address how to control illegal entries.

“We recognize that the great migration challenge we face in the hemisphere requires collaboration and cooperation and shared responsibility,” Blinken said in an official statement to the press.

He added that the processes to grant asylum to those who have a “valid justification” to access the benefit should be improved, and also “expand legal channels” and create options to protect those who cannot have asylum so that their repatriation is “easier. “.