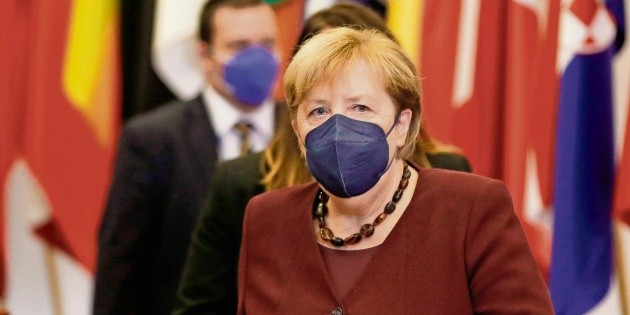 European Union leaders yesterday praised the influential presence and negotiating skills of German Chancellor Angela Merkel, who is participating in what may be her last EU summit after 16 years in power.

“He is someone who for 16 years really marked Europe and helped us, the 27 countries, to make the right decisions with great humanity in difficult times”, said Belgian Prime Minister Alexander de Croo.

Merkel’s departure from the scene “will leave a great void, because she is someone who has been in office for so long and who has had a great influence on the development of the EU,” added her Austrian counterpart, Alexander Schallenberg.

The German Chancellor is “a great policy, and she was probably a stabilizing factor that is urgently needed in very difficult situations,” said Lithuanian Prime Minister Ingrida Simonyte.

The Lithuanian official expressed her “enormous respect” for Merkel.

The president of the European Commission, Ursula von der Leyen, had recently underlined how the analytical spirit of Merkel (of whom she was minister) had been crucial in unlocking the sometimes endless European negotiations.

Withdrawal of Merkel the European political scene raises fears about a vacuum within the EU in the face of challenges such as economic reconstruction postpandemia, climate change or even affirmation of its geopolitical role vis-à-vis the United States and China.

Merkel had been criticized for her government’s attitude during the Eurozone crisis following the global financial collapse of 2008-2009. However, it was later hailed for its response to the migration crisis in the mid-2010s and for its role in defining a common debt for the bloc as a way to deal with the pandemic.