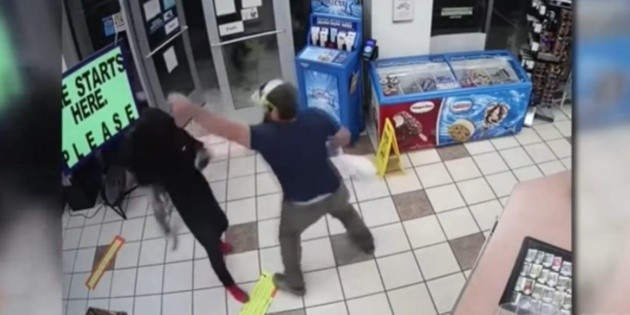 A new video is being viewed by millions on social media and shows a man, a veteran of the United States Marine Corps (US), disarming a thief who enters a store in a matter of seconds.

The video is captured by a security camera and it can be seen how three robbers enter a store, at a gas station, with the intention of committing a robbery. One of them enters with a pistol and points at the client, but he is not intimidated and throws himself on the subject, preventing the theft, while the other two run out of the establishment.

The events take place in Yuma County, Arizona, on October 20, according to the television network ABC15 Arizona. And the former marine assured that “instinct took over”, in statements for television about his actions, while emphasizing that Such reactions are part of their training: “The Marine Corps taught me not to waste my time.”

The man shot down the thief, threw the gun away, and waited for the police to arrive and take over.. The video has been commented on by thousands of people who celebrate the reaction and strength of the former marine to avoid crime and protect himself from the threat so quickly.

The police reported that the detainee is a minor and was charged with armed robbery and aggravated assault, while continues the search for his two accomplices. He also reported that no victims were registered due to the event.