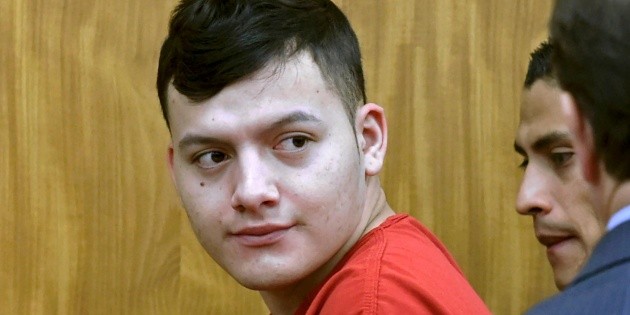 A Salvadoran immigrant testified Thursday before a judge that he killed four people in northern Nevada, initiating a two-stage legal process that, according to the judge and prosecutors, will avoid two trials with possible death sentences and will put the 22-year-old in state prison for the rest of his life.

Wilber Ernesto Martínez Guzmán pleaded guilty to two counts after intense questioning by the district judge for the county of Washoe, Connie Steinheimer, in Reno.

The charges are for first degree murder in the January 2019 deaths of Gerald and Sharon David at their Reno home.

Steinheimer acknowledged that the guilty plea eliminated the death penalty in the case, and told Martínez Guzmán that he will have to enter guilty pleas in Douglas County for the murders of two women in Gardnerville.

Martínez Guzmán told police that he committed a series of robberies and attacks with a firearm because he needed money to buy methamphetamine.

Prosecutor Steinheimer explained that if Martínez Guzmán does not plead guilty in Douglas County, prosecutors in that county and Washoe could overturn his plea agreement and reapply for the death penalty.

Washoe County Attorney Chris Hicks and Douglas County Attorney Mark Jackson initially planned a single death penalty trial for Martinez Guzmán, but the Nevada Supreme Court ruled on September 30 that the defendant would have to be tried separately in the two jurisdictions.

According to authorities, Martínez Guzmán stole a .22 caliber pistol from the David’s residence in southwest Reno on January 4, 2019. Days later he shot dead Constance Koontz, 56, already Sophia Renken, 74, in separate attacks inside their respective residences in Gardnerville, and later returned to the David’s home to rob and murder them on January 15.

Gerald David, 81, and his wife, a year younger, were senior members of the Reno Rodeo Association and had employed Martínez Guzmán as a gardener the previous summer.

The defendant was arrested in Carson City during a search in which researchers tracked the Apple watch that was stolen from Koontz, locating him at the home of Martínez Guzmán’s mother. Martínez Guzmán has been being held without bond in the Washoe County Jail in Reno.

At the time, the case caught the attention of then-President Donald Trump, who said it demonstrated the need to build a wall on the border between Mexico and the United States. Authorities said the defendant was in the United States illegally, but did not say how or when he arrived in the country.