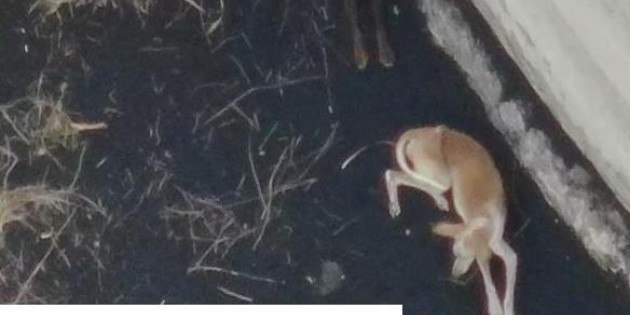 The operation was ready for rescue four dogs with drones who had been trapped for days by the lava from the volcano that erupted on the Spanish island of La Palma, but the animals they disappeared.

A self-styled group “A-Team” allegedly came forward to the rescue of the Aerocámaras company and would have saved the animals.

While the preparations for the flight with cargo drones that had been devised to rescue the hounds – a breed that has a native variety in these Canary Islands – were being refined, one or more people entered the site and took the dogs out without being knew nothing of it until this Thursday.

“Fuerza La Palma. The dogs are fine. ‘A’ Team”, It is the message that someone left written on a canvas placed in the pond where the dogs had been seen days ago, as shown in a video probably uploaded by its authors last night to the YouTube social network.

“At least they have had humor“replied Jaime Pereira, the CEO of Aerocámaras, the firm that had been preparing the operation for three days.

Already 24 hours ago they said they were surprised not to find the dogs, neither with thermal cameras, nor summoning them with claims that should attract them.

Evidence of the presence of people

Whether the animals are okay remains to be seen, but it is a fact that the canvas shown in the video is located in the pond where the hounds had taken refuge, as confirmed by Pereira.

“The images of the drones – he explains – prove that it is there. And it has at least two days in the pondOnly that the wind had thrown it and turned it upside down, that’s why nobody had noticed the “A-Team”, which borrows its name from the famous television series of the 80s starring a group of former soldiers who worked in favor of just causes.

The important thing is that the dogs have come out of there. It’s what we wanted. Now we just want to see them

Aerocanarias also confirmed that around where the canvas is located there are footprints of people on the ash: proof that someone got in there.

Pereira does not know when it happened, but suspects that it was at least two days ago. And, besides, he is not surprised: the thermal images show that there are points of the laundry crust at 40-60 degrees, on which someone relatively informed or helped with a handheld thermal camera could walk, although all this seems reckless .

“The important thing is that the dogs have left there. It is what we wanted. Now we just want to see them … and we go,” he added.
What is clear to the veterinarians who advise this company and the animal platform “Leales.org” is that the dogs did not leave that island alone among the lava. They could have done it, because if a person had walked, they could also cross, weighing less, just over 15 kilos.

However, they do not make sense of it: in that place the animals had water and received food regularly. They would not have left.

“We have given everything that was in our power. One way or another the dogs are no longer there. It is what we wanted “, Pereira has argued. That and make society aware that if you have an animal, you are responsible for taking care of it, treating it well and not abandoning it.