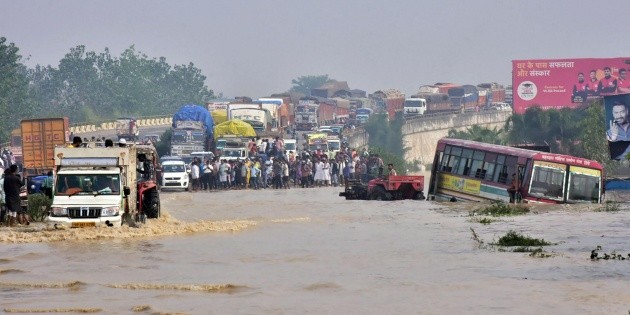 Almost 200 people have died in India and Nepal in floods and landslides caused by heavy rains this week, authorities said Thursday, warning of more episodes of heavy rainfall.

In India, the death toll from these bad weather reached 102 people and, in neighboring Nepal, the authorities raised the previous balance of 31 victims to 88 this Thursday.

Experts link the frequency of these extreme weather events, increasingly recurrent in South Asia, to the acceleration of climate change and factors such as deforestation and the construction of dams.

Among those killed in Nepal is a family of six, including three children, whose home was buried by a landslide of dirt and debris.

“All disaster management committees are actively working on rescue and relief operations,” said emergency official Dijan Bhattarai, noting that they mobilized the police and the army.

In the Indian state of Uttarakhand (north), in the heart of the Himalayas, the authorities confirmed the death of 55 people, nine more than in the previous balance.

The bad weather has damaged roads and bridges in this area and has left many populations isolated. The government also deployed the army in order to reach the thousands of incommunicado inhabitants.

AFP images show an entire house dragged down a slope or a group of police officers forming a chain so as not to be swept away by the strong stream of water that descends down a street.

Regional Disaster Management Officer S Murugeshan indicated that the balance could increase because there were many missing people, including 20 tourists who had gone on a hike to a glacier.

Five people were killed in the eastern state of West Bengal, in the east of the country, including two eight- and ten-year-old girls from the same family carried away by running water in the hills above the city of Darjeeling.

“The mud, rocks and water coming down the hills of Darjeeling damaged 400 houses and thousands of people were evacuated away from the rivers on its slopes,” said Disaster Management Minister Javed Amhed Khan.

In addition, “hundreds of tourists are isolated in a Darjeeling complex … Landslides have blocked highways and roads in the region,” he added.

The meteorological office released a red alert for the state, with warnings that extreme rain will continue in Darjeeling and other nearby cities on Thursday.

In Kerala, in southern India, where 42 people have died since last week, the meteorological department also warned of heavy rains in at least three districts.

In 2018, about half a thousand people died in that state on the Arabian Sea coast from the worst floods in almost a century.

The Red Cross, whose teams are involved in rescue operations in both countries, warned people living in low elevation areas of the risk of rising waters and landslides.

“The populations of Nepal and India are caught between the pandemic and the aggravation of climatic catastrophes, which has an impact on millions of lives and means of survival”, indicated the organization.