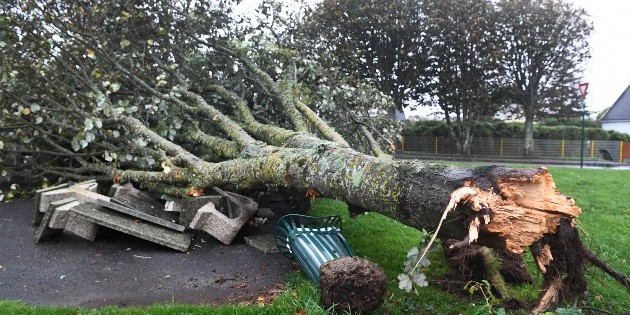 The passage of the storm “Aurora” in northern France left 250,000 homes without electricity during the night of Wednesday and early Thursday, especially in the Normandy region.

Of the 250,000 homes initially affected, some 40,000 were still without electricity at dusk, indicated the Enedis company, which mobilized some four thousand technicians to solve the cuts caused by the strong wind.

Train traffic was also affected in the north of the country. Some netizens posted photos of trees that fell in the middle of the tracks on social media.


“Due to strong gusts of wind, falling trees affect the movement of trains” in the Paris region, in Normandy, in the North and in Lorraine, the Minister of Transport, Jean-Baptiste Djebbari, warned in the morning. in a tweet.

In Brittany (west), several lines were also affected. In Plozévet, in the far west, a house under construction collapsed in the storm.

According to the meteorological institute Météo France, Wind gusts of 175 km / h were recorded in Fécamp and 143 km / h in Granville, both in Normandy, and 109 km / h in the south of Paris.

The first storm of the season, which has swept across northern France since Wednesday afternoon, continued its progression on Thursday toward the German border to the east.

In the neighboring country, where the storm was baptized as “Ignatz”, the winds reached 100 km / h in much of the territory.