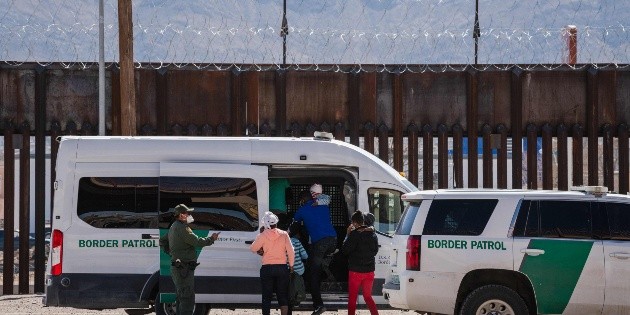 United States authorities more than 1.7 million were arrested of undocumented migrants on its southern border during fiscal year 2021 that ended in September, a record figure, The Washington Post revealed today.

Citing Customs and Border Protection (CBP) data that has yet to be released, the newspaper indicates that Mexico was the largest source of illegal migration in fiscal year 2021, with more than 608 thousand Mexican nationals by border agents.

The second largest group is made up of migrants from Haiti, Venezuela, Ecuador, Cuba, Brazil, and from dozens of other nations other than Mexico and Central America, characterized as “others.” In total, they added 367 thousand detainees.

Then there are the migrants from Honduras (309 thousand), Guatemala (279 thousand) and El Salvador (96 thousand).

CBP figures cited by the Post reveal that, in the first nine months of Joe Biden’s administration, more than 1.3 million of migrants were put in custody, including 192 thousand just last month.

The Post recalls that in the fiscal years between 2012 and 2020, arrests on the southern border of the United States averaged about 540,000. The 2021 data is more than three times that number and is the second highest annual total ever recorded.

Of the 1.7 million migrants detained, 61% were expelled under Title 42, which allows this type of express expulsion under the argument of the health emergency caused by the pandemic.

The figure includes both migrants arrested by the Border Patrol between points of entry and those who attempted to enter the United States without authorization at official points of entry.

Along the border with Mexico alone, agents detained 1.66 million migrants in fiscal year 2021. The figure exceeds the 1.64 million who were taken into custody in 2000 in that area.

The Rio Grande sector was the one with the most crossings, with 549 thousand arrests by the Border Patrol, followed by the Del Rio sector, with 259 thousand. It was in this area that last September some 15,000 migrants, mostly Haitians, set up makeshift camps, but a few days later, most were returned to their country of origin.

In addition to the expulsions under Title 42, Secretary of Homeland Security Alejandro Mayorkas said he is in talks with Mexico to reapply the “Stay in Mexico” program, for which asylum seekers in the United States must wait in Mexican soil for their audiences to arrive and their processes to be resolved.

The Biden administration suspended that program in June, introduced by the Donald Trump administration in January 2019. However, a federal judge ordered the policy to be restored.