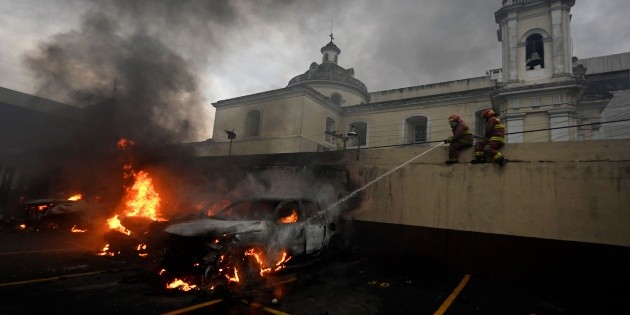 A group of retired soldiers entered the Guatemalan Congress on Tuesday and set several vehicles on fire. Veterans are demanding that a law be passed that compensates them for having served during the internal armed conflict.

After protesting for more than two hours in front of Congress, the military broke down the parking lot doors and entered. Videos published by local media show that at least three vehicles were set on fire.

The deputy of the National Unit of Hope (UNE) bench, Carlos Barreda, denounced on his Twitter account that congressional workers were attacked by the military. “There are comrades trapped in Congress. The presence of the Human Rights Ombudsman and the security forces is urgent.”


Separately, the congressman of the Semilla block, Luis Fernando Pineda, published on his social networks that the military set fire to the offices of other deputies. “We are locked in the facilities of Congress. They have already knocked down the gate, destroyed vehicles and burned offices in the parking area.”

Congressional workers fled the legislative palace through the roof to avoid being attacked by the military, who apparently carried machetes. The anti-riot groups were present and evicted the retired military.

The Attorney for Human Rights, Jordán Rodas, asked the Ministry of the Interior to capture those responsible for the fires and attacks against Congress personnel.