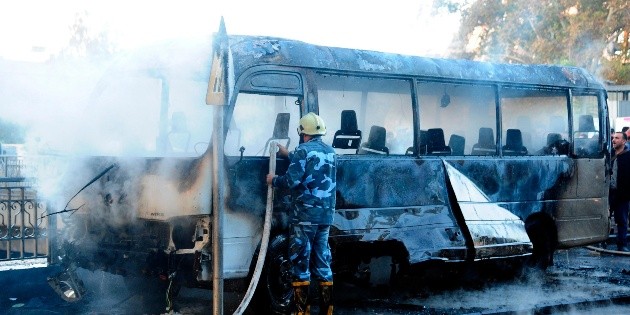 Two explosive devices detonated early in the morning as the military vehicle crossed the Al Raes bridge, in the heart of the Syrian capital, while the security forces were able to defuse a third bomb, according to SANA.

The official media did not specify if all the victims were military or among them were also civilians affected by the explosion, but it released images of the bus when it had already been evacuated, practically charred.

The Syrian Observatory for Human Rights, a UK-based NGO and a wide network of partners on the ground, confirmed the two explosions against a “night bus belonging to the regime forces” and raised the number of soldiers killed to 14.

The organization warned that the death toll could increase in the next few hours due to the existence of a series of wounded in a “critical” condition. Damascus has not registered any such actions since more than three years ago troops loyal to Syrian President Bashar al-Assad regained control of the Eastern Ghouta region, a former opposition stronghold on the outskirts of the capital.

On April 14, 2018, Syrian forces and their allies imposed their control over the city of Duma, which was regarded as the return of all Gout Oriental at the hands of the Syrian Government.

The capital of the Arab country does suffer from time to time bombing by Israeli aviation, although in many cases the projectiles are intercepted by Syrian antiaircraft defenses. Currently, most of Syria is in the hands of Damascus, and battles are roughly continuing only in the country’s last opposition stronghold, the northwestern province of Idlib, and some areas of neighboring Aleppo province.