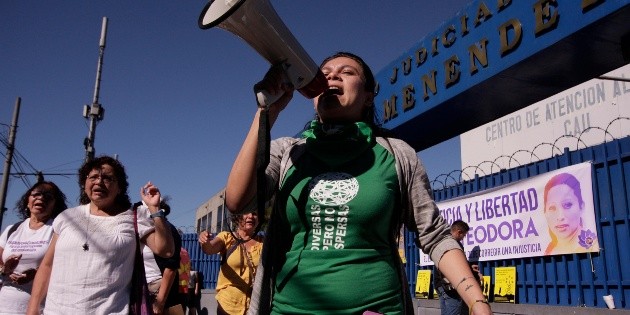 The Legislative Assembly of El Salvador rejected on Wednesday to reform the Penal Code to exempt from criminal responsibility those who consent or carry out a abortion, thus closing the doors to allow it even when the woman’s life is at risk.

“This reform is unconstitutional. Those groups that take advantage of organized women to take them out in marches, enough is enough”

With the votes of 73 of the 84 deputies, the unicameral Congress rejected the request presented by organizations defending the rights of women to reform article 133 of the Penal Code to authorize abortion in three causes: when the life of the woman is at risk, when the life of the fetus is unviable and when the pregnancy is the product of rape or rape in women and minors.

“This reform is unconstitutional. Those groups that take advantage of organized women to take them out in marches, enough is enough. The reform to 133 will never guarantee abortion because it is so unconstitutional since article 1 of the Constitution“Deputy Marcela Pineda, of the ruling New Ideas party, said bluntly.

“It seems to me that abortion should be penalized more drastically because even today there are still many clandestine abortions,” added deputy Guillermo Galles of the Gran Alianza por la Unidad Nacional (GANA) party:

The deputies argued their rejection, noting that, in an amparo judgment of the Constitutional Chamber of the Supreme Court of Justice in 2013 “there is an absolute impediment to authorize the practice of an abortion to contradict the constitutional protection granted to the human person from the moment of conception “.

This is the fourth initiative that has been presented to Congress since 1998 to request the decriminalization of abortion.

Abortion is absolutely criminalized in El Salvador since the reform of the Penal Code in 1998. Before the reform, since 1974, abortion was allowed on three grounds: when the woman’s life was at risk, due to foreseeable and serious malformations in the fetus, and when the pregnancy was the product of rape.