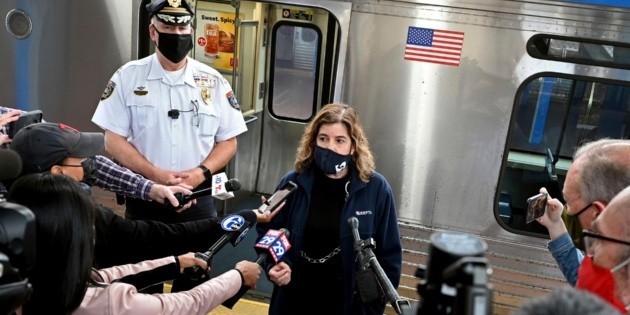 A man accused of rape a woman on a train from a distance outside of Philadelphia, in the United States, harassed her for more than 40 minutes while several passengers raised their cell phones, apparently to record the aggression without interveningauthorities said today.

Passed more than 20 stops while the man stalked, groped and eventually raped the woman, the police chief of the Pennsylvania Transportation Authority of Southeastern said at a news conference Monday.

The police believe that none of the passengers on the train called the 911 emergency number. It is being investigated whether some passengers recorded the assault.

The man and victim boarded the train at the same stop Wednesday night in North Philadelphia. Police separated the man from the woman at the last stopthree minutes after a transportation service employee called 911, according to authorities.

“What we want is for everyone to be angry and disgusted and be determined when it comes to making the system more secure, “said the chief of police of the transport network, Thomas J. Nestel III, in a press conference.

Fiston Ngoy, 35, was charged with rape and related crimes, according to his arrest records.

What we want is for everyone to be angry and disgusted and determined to make the system more secure.

Police documentation details the hours of the attack, including that 40-minute period during which the woman appeared to have pushed Ngoy away several times.

Nestel did not give an approximate number of witnesses, and it was unclear from police documents how many passengers were present during those 40 minutes. Authorities have not released the surveillance video.

“I can tell you that there was people raising their cell phone in the direction of this woman that she was being attacked, “she said.

They could prosecute passengers who recorded assault

Upper Darby Police Superintendent Timothy Bernhardt noted that surveillance footage showed other passengers on the train and that someone “should have done something.” Bernhardt did not respond to messages sent Monday.

Speaking to the New York Times, Bernhardt said that people who recorded the attack and did not intervene could be processed, something the Delaware County prosecutor’s office would decide.

Philadelphia 911 did not receive a call. Nestel said police were waiting for Delaware County 911, which covers the last two stops on the train line, to determine if it had received calls.