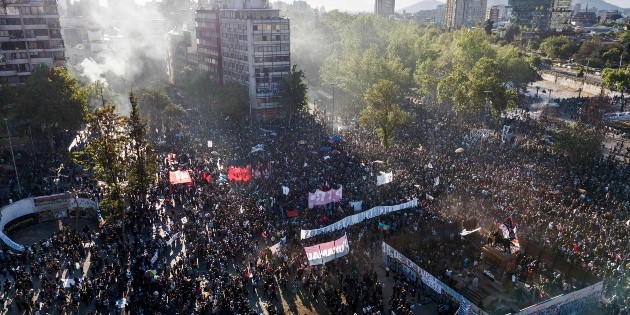 One person died from a firearm shot at dawn this Tuesday in an attempt to loot a commercial premises in Santiago de Chile, one of the violent events that surrounded the celebration of the second anniversary of the social outbreak on Monday night. of 2019.

As reported by the Chilean Carabineros police force, “A mob tried repeatedly to loot a place and at one point around 10 or 20 ballistic impacts were heard”, resulting in an injured person who was taken to a health center, where he died.

Tens of thousands of people demonstrated this Monday throughout Chile to commemorate the second anniversary of the social protests that took place in the country as of October 18, 2019 and that ended up starting a constituent process.

The most massive concentration took place in the central Plaza Italia in Santiago de Chile, with about 10 thousand people, according to the first figures offered by the police authorities, who the vast majority of them demonstrated peacefully, in a festive atmosphere with songs and music.

During these celebrations, isolated groups carried out riots, looting, fires, destruction of public furniture and attacks on private property, being the most serious fact so far this deceased person.

Waiting for a new police report, on Monday night more than 30 people were arrested throughout the country for vandalism.

At the end of 2019, Chile experienced the most serious social crisis since the end of the Augusto Pinochet dictatorship (1973-1990), a revolt for a fairer economic model and more social rights, with thirty deaths and thousands of injuries.

The riots left episodes of extreme violence with fires, looting and destruction of public furniture, in addition to accusations by different international organizations against the security forces for human rights violations.

The constituent process to draft a new Magna Carta in which Chile is immersed, and which this Monday experienced an important milestone with the beginning of the substantive debate on the content of the Basic Text, was the institutional and political solution that the country found to calm the streets in 2019.